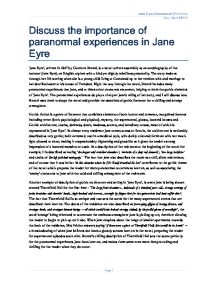 Discuss the importance of paranormal experiences in Jane Eyre

Discuss the importance of paranormal experiences in Jane Eyre 'Jane Eyre', written in 1847 by Charlotte Bront�, is a novel written essentially as an autobiography of the narrator (Jane Eyre), an English orphan with a kind yet slightly rebellious personality. The story leads us through her life starting when she is a young child living at Gateshead up to her reunion with and marriage to her dear Rochester at his house of Ferndean. Right the way through the novel, Bront� includes many paranormal experiences that Jane, and at times other characters encounter, helping to form the gothic elements of 'Jane Eyre'. The paranormal experiences do play a vital part Jane's telling of her story, and I will discuss how Bront� uses them to shape the novel and provide the essentials of gothic literature for a chilling and strange atmosphere. Gothic fiction is a genre of literature that combines elements of both horror and romance, recognized features including terror (both psychological and physical), mystery, the supernatural, ghosts, haunted houses and Gothic architecture, castles, darkness, death, madness, secrets, and hereditary cursesi, most of which is represented in 'Jane Eyre'. In almost every residence Jane comes across or lives in, the architecture is noticeably described as very gothic; built extremely vast in a medieval style, with darkly coloured furniture with not much light allowed to enter, making it unquestionably frightening and ghostlike as it gives the reader a strong impression of a haunted mansion or castle. In a description of the red-room at the beginning of the novel for example, it is described as having 'the largest and stateliest chambers', 'curtains of a deep red damask', 'two large windows' and chairs of 'darkly polished mahogany.' ...read more.

the novel, debating whether or not Jane's dream is merely coincidence or if there is another unexplained force that is causing these events to happen. The fact that most of these paranormal experiences, visions and premonitions are almost never fully explained by Bront� means that the reader is forced to use their imagination and predict what will happen, and without them, Jane's experiences in the novel would have much less impact as they would not have as much mystery or suspense. It is in the gothic residence of Thornfield Hall that Jane witnesses most of the paranormal events. She first hears strange laughter almost as soon as she arrives at the mansion, describing it as 'tragic, as preternatural a laugh as any I ever heard... I should have been superstitiously afraid...". Although Jane finds out afterwards that the laugh was in fact Mrs Rochester's mad cackles, at this point in the novel, neither Jane nor the reader know where the laugh is coming from, provoking fear of the worst. Bront� makes the strange laughter appear extremely mysterious and ghostlike for the reader to believe that it is in fact paranormal activity (although it is later found out not to be) by use of extremely ghostlike and chilling words such as "groping" and "demonic". This happens a great deal throughout the novel, as nothing exceptionally paranormal does happen in 'Jane Eyre' apart from the extraordinary coincidences that occur, only the reader is led to believe that something paranormal is happening also by means of Jane's observant and inquisitive nature - " 'Who is there?' ...read more.

of showing that the paranormal events of the novel do play an extremely important role in Jane's life, combining with or contradicting with religious beliefs. It is almost as if Bront� throughout the novel is constantly trying to prove to us that religion is not as true as people make it out to be by including these paranormal aspects, but as a final thought she inserts this miracle of Jane finding Rochester to show that religion gives us comfort and there is always the possibility of there being a God somewhere answering our prayers. In conclusion, though there are many instances of paranormal events occurring in 'Jane Eyre', most of these events in actuality are not paranormal at all. Bront� creates a haunting and ghost-like atmosphere whenever something inexplicable is about to happen, leading the reader to believe that there are supernatural happenings taking place, whereas in actual fact the circumstances can easily be explained. Despite this, the importance of every 'paranormal' experience is evidently significant seeing as without them, the impact of Jane's experiences in her autobiography would be reduced to a great extent. It is Jane Eyre's inquisitive, curious and 'witch-like' character that also combines with the paranormal events for 'Jane Eyre' to become successful gothic novel, pleasing both Victorian readers and readers today for different reasons. The importance of paranormal events in the novel is undoubtedly considerable despite how subtle they may appear at first, contributing to almost every decision that is made and every twist in the story of Jane Eyre. i Sourced from Wikipedia Wikipedia. (n.d.) http://en.wikipedia.org/wiki/Gothic_literature ?? ?? ?? ?? Jane Eyre Coursework [First Draft] Arta Ajeti 11B.2 Page 1 ...read more.