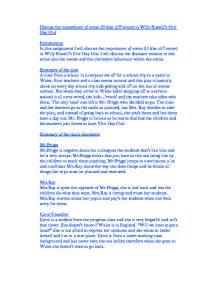 Discuss the importance of scene 35 (the cliff scene) in Willy Russell's Our Day Out Introduction In this assignment I will discuss the importance of scene 35 (the cliff scene) in Willy Russell's Our Day Out. I will discuss the dramatic tension in this scene also the events and the characters behaviour within the scene. Summary of the play A class from a school in Liverpool set off for a school trip to a castle in Wales. Four teachers and a class seems normal and this play is basically about an every day school trip kids getting told off on the bus all seems normal. But when they arrive in Wales (after stopping off at a service station) it all turns wired, the kids....'revolt' and the teachers take sides with them. The only 'sane' one left is Mr. Briggs who decided to go. The class and the teachers go to the castle as planned, but Mrs. Kay decides to alter the plan, and instead of going back to school, she pity's them and lets them have a day out. Mr. Briggs is furious as he learns that that the children and the teachers join forces to have 'Our Day Out'. Summary of the main characters Mr.Briggs Mr.Briggs is negative about his colleagues the students don't like him and he is very abrupt. Mr.Briggs thinks that you have to risk not being like by the children to teach them anything. Mr.Briggs jumps to conclusions a lot and confronts Mrs.Kay about the way she does things and he thinks all things like trips must be planned and executed. Mrs.Kay Mrs.Kay is quite the opposite of Mr.Briggs, she is laid back and lets the children do what they want. Mrs.Kay is caring and trusts her students. Mrs.Kay worries about her pupils and pity's the students when she feels sorry for them. Carol Chandler Carol is a student from the progress class and she is very forgetful and isn't that clever. ...read more.

Another line to show the tension is: "Carol slips on the edge of the cliff." This is tense because it makes the audience jump from their seats. The audience also wonder if she is going to survive or not. I think that dramatic tension is important in a play like this because without it the play would be rubbish, for example Carol says in scene 35, "Don't you come near me!" If Carol had just said, "Don't come near me please" it would have no enthusiasm to it and therefore there would be no tension to it but because she shouted at Mr.Briggs it brought tension to that specific part in the scene of the play. The audience was left thinking what will be Mr.Briggs reaction and how will Carol react back to it. When she shouts at Mr.Briggs she is out of character it's not like Carol acts in the rest of the play this also creates tension. The cliff-top scene is one of the most dramatic parts of the play. It is also the scene where both Briggs and Carol have a change in their personality. Carol becomes rude and rebellious (like Linda) and starts calling him "Briggsy". She begins to use unfamiliar words and phrases... "friggin" and also has a change in attitude, from being well-mannered to being cheeky in a cocky sort of way. She also begins to ignore him at times, which she wouldn't have done previously. Briggs however, becomes somewhat more considerate and develops empathy for Carol and her classmates. To begin with, he expects to be obeyed, but later realises that he is not getting the desired response from the children. After Carol tells him how selfish he is, he takes it into consideration and tries a different approach by smiling at the children. The constant camera changes from Briggs to Carol and vice versa, create tension, as does the scene where Carol steps towards the edge of the cliff. ...read more.

'Briggs with Andrews asleep next to him sees the familiar surroundings and the kids hanging about the streets. He sits up puts his tie back to normal goes to straighten his hair and feels the cowboy hat'. Its home to Mr Briggs when the coach arrives into Liverpool and makes him realise the responsibility and concern of his reputation. In the film the camera shot of the school behind Mr Briggs emphasises his feelings of responsibility, his concern and reputation. Also when the camera snaps Mr Briggs singing on the back of the coach with all the children. There is a sudden fade out and echo of the music and noise, which could symbolise that Briggs changed attitude, is just a snap shot and will fade just as the film exposed to the light. The film contained many pictures of Mr Briggs enjoying himself. That's why he exposes it to the light, as he wants it all forgotten with no memories left remaining. It seems as if he is disappointed with himself, as he has relax with the children. The Play 'Our Day Out' is not really relevant today. Special need classes are not all about fun for the pupils. The pupils are educated just the same as other pupils their age just with more help. The teachers are not like Mrs Kay and believe there is no point teaching them. As teachers today usually believe in trying to educate everyone. Although, there is still run down areas in some places so the story could be half-relevant to today. My view on the play is that it is very good and extremely well written, it makes you feel as if you are they're watching every scene happen. This is a good thing and means that Russell has done very well at describing the scenes. The play keeps you gripped and hooked right until the end. It makes you feel as though you can't put it down and every scene is left at a cliff hanger, making you want to read on and find out what bizarre thing happens next. ...read more.