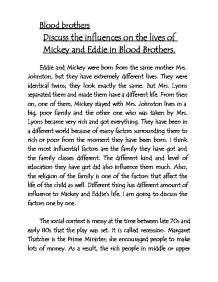 Discuss the influences on the lives of Mickey and Eddie in Blood Brothers.

Blood brothers Discuss the influences on the lives of Mickey and Eddie in Blood Brothers. Eddie and Mickey were born from the same mother Mrs. Johnston, but they have extremely different lives. They were identical twins; they look exactly the same. But Mrs. Lyons separated them and made them have a different life. From then on, one of them, Mickey stayed with Mrs. Johnston lives in a big, poor family and the other one who was taken by Mrs. Lyons became very rich and got everything. They have been in a different world because of many factors surrounding them to rich or poor from the moment they have been born. I think the most influential factors are the family they have got and the family classes different. The different kind and level of education they have got did also influence them much. Also, the religion of the family is one of the factors that affect the life of the child as well. Different thing has different amount of influence to Mickey and Eddie's life. I am going to discuss the factors one by one. The social context is messy at the time between late 70s and early 80s that the play was set. ...read more.

He also wants to his elder brother Sammy because he wants to get older so he can do everything he loves. We can see how much he wants to be Sammy in the book on p.30, Act 2, Scene 1, he has repeated the sentences - "I wish I was our Sammy."- for five times. He does everything Sammy did; however, Sammy was not a good example for Mickey to learn. So Mickey becomes a joker and streetwise since he has got influenced by his brother Sammy. The family of Eddie, we know that he is the only child in his rich family and they are in middle class. He lives with his mum only most of his life. We don't know much about Eddie's father because the book does not mention about him much. Mrs., Lyons, Eddie's mother, loves her son very much. She gives him a good shelter, gives him everything he wanted. This makes very weak and soft and he will not know the hardship of the working class since life is easy for him. Time ran through quick by dramatic devices in the book. We can see how much difference between Mickey and Eddie over a long period. At first, when they are born, they are not much different from each other in either class or education. ...read more.

This shows that Mrs. Johnston is superstitious. I believe that she believes in religion. And this makes Mickey kind of superstitious as well. He believes what 'blood brother' is. On the other side, I don't think Mrs. Lyons has any religion at all. She does not respect Mrs. Johnston and always use the weakness of Mrs. Johnston, that she is superstitious, to coerce her into doing something. At first Eddie does not believe any superstition things but Mickey influences him. He admires Mickey and everything Mickey does. He likes Mickey and wants Mickey likes him as well. On p.32, Act2 2, Scene 2, we know Eddie gives sweets to Mickey. This reflected he is eager to please. Eddie used to don't know much about colloquial until Mickey told him. He thought everything Mickey said was smashing. And he believes that what Mrs. Johnston told her on p.35, Act 2, Scene 2, about bogeyman. This shows that he is na�ve and innocent. In conclusion, I can divide the influences on the lives of Mickey and Eddie in four main sections. The differences between Mickey and Eddie in the family, the social class they are, the education they have and the religion of the family. They are identical twins but they have got a very different life, I think it is because these things that I have mentioned before influenced them. ...read more.