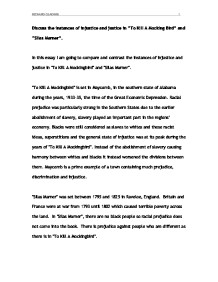 Discuss the instances of injustice and justice in

Discuss the instances of injustice and justice in "To Kill A Mocking Bird" and "Silas Marner". In this essay I am going to compare and contrast the instances of injustice and justice in "To Kill A Mockingbird" and "Silas Marner". "To Kill A Mockingbird" is set in Maycomb, in the southern state of Alabama during the years, 1933-35, the time of the Great Economic Depression. Racial prejudice was particularly strong in the Southern States due to the earlier abolishment of slavery, slavery played an important part in the regions' economy. Blacks were still considered as slaves to whites and these r****t ideas, superstitions and the general state of injustice was at its peak during the years of "To Kill A Mockingbird". Instead of the abolishment of slavery causing harmony between whites and blacks it instead worsened the divisions between them. Maycomb is a prime example of a town containing much prejudice, discrimination and injustice. "Silas Marner" was set between 1795 and 1825 in Raveloe, England. Britain and France were at war from 1793 until 1802 which caused terrible poverty across the land. In "Silas Marner", there are no black people so racial prejudice does not come into the book. There is prejudice against people who are different as there is in "To Kill A Mockingbird". "Silas Marner" was written in 1861 by George Elliot, it tells the story of a miserly weaver, the novel reveals injustice, the consequences of this injustice and finally the righting of wrong. In "To Kill A Mockingbird", Maycomb is a very prejudiced town, this could have been because it was behind time. Most people in Maycomb are r****t except for the more middle class people such as Atticus and Miss Maudie. ...read more.

His father entered the room. As Mr. Radley passed by, Boo drove the scissors into his parent's leg, pulled them out, wiped them on his pants, and resumed his activities." This was one of the many stories that was made up by Miss Stephanie just because Boo Radley was different. Maycomb was a very prejudiced town, perhaps because of the way they were behind the times. In "Silas Marner", although there is no racial prejudice there are many other injustices in the book. The injustices are against others who are 'different'. Silas Marner is a character, withdrawn from the outside world as a result of unfortunate circumstances and events. This reaction caused judgement and disapproval from his surrounding community resulting in many incidents of injustice and discrimination towards his character. "So had his way of life....and he never strolled in to the village to drink a pint at the Rainbow." Within the community of Raveloe the majority of the people strolled to the village for a drink, as this quote signifies Silas Marner did not do this, and because of this was viewed as different. In Raveloe, people were suspicious because they didn't know where he came from. He did not socialize and he was a hard worker. We also come across the instance where some children kept coming up to Silas' house and peeping in the window. When Silas Marner looked at them they would run away. "he liked their intrusion so ill that he would fix on them a gaze that was always enough to make them take to their legs in terror". The children did this because Marner was different. ...read more.

With the unjust accusation of having stolen 'treasure', Silas later amasses 'treasure' which is later stolen from him. The child comes in place of the treasure and he stops being alone. Later the treasure is found but it has a different value to him and can be used for the child. Silas' religion returns, this new belief is based upon Silas' love for his friends. On finding Eppie, Silas ends his penance as Godfrey is beginning his. Silas rejects his fellow men and is solitary for fifteen years. Godfrey rejects his own child and is childless for fifteen years. Both men suffer, Silas recovers, Godfrey does not. Godfrey tried to get Eppie back because his new wife could not have children and they both agreed to try and get Eppie to come and live with them. When they asked Eppie, Silas said it was entirely her decision. Eppie rejected her birth-father like he rejected her, although they were the rich, high-class family, she would still prefer to live with the kind father she grew up with. This shows justice because Godfrey rejected Eppie and now Eppie rejected Godfrey. Silas Marner is the true victim of prejudice. Expelled from one community because of a false accusation of theft, and finding himself a stranger in the community in which he goes to live. He first becomes a miser then I robbed of his gold but the 'blessed' with a needy child in its place. Eventually through her he is emotionally healed and finally accepted into the community. As in "To Kill A Mockingbird", the ending is happy with justice being done. Both novels are 'moral' stories and both portray a great injustice, but the justices outweigh them although in "To Kill A Mockingbird", a man loses his life. RICHARD GLADWIN 1 ...read more.