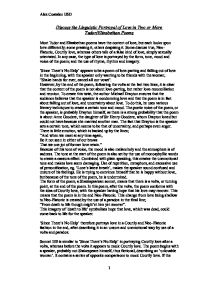 Discuss the Linguistic Portrayal of Love in Two or More Tudor/Elizabethan Poems.

Discuss the Linguistic Portrayal of Love in Two or More Tudor/Elizabethan Poems Most Tudor and Elizabethan poems have the content of love, but each looks upon love differently; some praising it, others despising it. Some discuss true, Neo-Platonic, Courtly love, whereas others talk of a false kind of love, simply s******y orientated. In any case, the type of love is portrayed by the form, tone, mood and voice of the poem; and the use of rhyme, rhythm and imagery. 'Since There's No Help' appears to be a poem of love-parting and falling out of love in the beginning, with the speaker only wanting to be friends with the woman; "Shake hands for ever, cancel all our vows". However, by the end of the poem, following the volta at the last two lines, it is clear that the content of the poem is not about love-parting, but rather love-reconciliation and reunion. To create this twist, the author Michael Drayton ensures that the audience believes that the speaker is condemning love and that the poem is in fact about falling out of love, and uncertainty about love. ...read more.

In this poem, after the volta, the poem conforms with the idea of Courtly love, with the speaker having hope that his love may recover. This means that the poem is in the end Neo-Platonic. This change from love being shallow to Neo-Platonic is created by the use of a paradox in the final line; "From death to life though might'st him yet recover". This imagery of 'death to life' symbolises hope that love, which was dead, could come back to life for the speaker. 'Since There's No Help' therefore portrays love in a Courtly and Neo-Platonic fashion in the end, after describing it in an unsure and unemotional way by use of a volta and paradox. Sonnet 130 is similar to 'Since There's No Help' in portraying Courtly love after a volta, whereas before the volta it appears to mock Courtly love. The poem begins with a speaker, probably not Shakespeare himself, thus fictional, describing an 'unlovable woman'. ...read more.

The speaker and the woman will therefore feel 'above' the shepherds, who would entertain them. Therefore the poem is no longer pastoral because there would be no class in a pastoral world. Thus the poem is not trying to win a woman that the speaker would love divinely, ie. Platonically and Courtly. Instead it is trying to seduce a woman for s****l desire, by greed and vanity. Thus, oppositely to 'Since There's No Help' and Sonnet 130, 'The Passionate Shepherd to his Love' begins by sounding like a pastoral love poem, but ends by not conforming with pastoral, Platonic or Courtly ideas. The others of course, begin by not conforming and ending by conforming. In conclusion, therefore, love is portrayed differently in Shakespearian and Tudor poems. The three poems that I have mentioned all use Courtly, pastoral and platonic ideas and use them to create a twist at the end of the poem but either suddenly conforming with the ideas after not conforming with them before ('Since There's No Help' and 'Sonnet 130'), and vice versa ('The Passionate Shepherd to his Love'). Alex Coatalen U6D 1 ...read more.