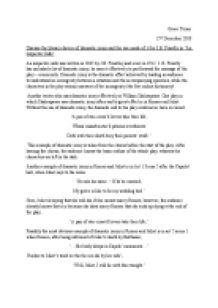 Discuss the literary device of dramatic irony and the use made of it by J.B. Priestly in An Inspector Calls

﻿Grace Turner 15th December 2010 Discuss the literary device of dramatic irony and the use made of it by J.B. Priestly in ?An Inspector Calls? An inspector calls was written in 1945 by J.B. Priestley and is set in 1912. J. B. Priestly has included a lot of dramatic irony; he uses it effectively to put forward the message of the play ? community. Dramatic irony is the dramatic effect achieved by leading an audience to understand an incongruity between a situation and the accompanying speeches, while the characters in the play remain unaware of the incongruity (the free online dictionary). Another writer who uses dramatic irony effectively is William Shakespeare. One play in which Shakespeare uses dramatic irony often and to great effect is in Romeo and Juliet. Without the use of dramatic irony, the dramatic end to the play could never have occurred: ?A pair of star-cross?d lovers take their life; Whose misadventur?d piteous overthrows Doth with their death bury their parents? strife.? This example of dramatic irony is taken from the chorus before the start of the play. After hearing the chorus, the audience knows the basic outline of the whole play, whereas the characters are left in the dark. Another example of dramatic irony in Romeo and Juliet is in Act 1 Scene 5 after the Capulet ball, when Juliet says to the nurse: ?Go ask his name. ...read more.

Mr. Birling only really values money and uses Sheila, his daughter, and her marriage to Gerald Croft, as a business deal to unite his business ?Birling and Company? with ?Crofts Limited?: ?? And now you?ve brought us together, and perhaps we may look forward to the time when Crofts and Birlings are no longer competing but are working together ?? Mr. Birling seems to be more interested in the business opportunity that his daughter?s marriage will provide, rather than the happiness of his daughter. This is not to say that he does not love his daughter or that he does not show any interest in her marriage, it just seems that his business is his main priority. Mr. Birling is a social climber and this is another reason he is so keen on his daughter?s marriage to Gerald Croft, due to the fact the Crofts are of higher status than the Birlings. Mrs. Birling is also of a higher social status than Mr. Birling and she constantly has to remind him of the correct way to behave. Mr. and Mrs. Birling have two children; Eric and Sheila. Both start the play being rather naive and Sheila seems to be very superficial. By the end of the play, however, both of them, unlike Mr. ...read more.

Sheila tries to stop her mother before it?s too late, but Mrs. Birling says ?Be quiet, Sheila!? and continues, oblivious to the situation. The use of dramatic irony in this play is to teach valuable lessons. It makes the audience doubt the characters believes and values. In most cases, we can give a reasonably accurate judgement about each character from their first speech. As this play is written in hindsight, we know that Mr. Birling?s judgements about the future are inaccurate and therefore we start to question his reactions, beliefs and values. Priestly wants us to disagree with everything Mr. Birling stands for and to therefore realise that the way Mr. Birling and people in general acted in 1912 could not continue. The Inspectors final speech concludes the play by telling the audience outright the point of the play and telling each member of the family that their views of life are inaccurate and need to change. He tells the Birling family that; ?We are members of one body. We are responsible for each other. And I tell you that the time will soon come when they will be taught it in fire and blood and anguish.? The audience know that in two years, the inspector?s speech will be proven correct by the outbreak of war. They also know that the lesson was not learned and that the Second World War occurred, and even in the current day, the lesson has still not been learned. ...read more.