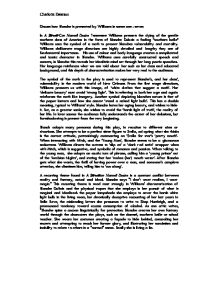 Discuss how Blanche is presented by Williams in scene one- seven In A Street Car Named Desire Tennessee Williams presents the dying of the gentile southern class of America in the form of Blanche Dubois a fading "southern belle" Williams uses the symbol of a moth to present Blanches vulnerability and mortality. Williams deliberate stage directions are highly detailed and lengthy they are of fundamental importance. His use of colour and body language creates a complicated and iconic character in Blanche. Williams uses carefully constructed speech and accents, in Blanche this reveals her idealistic mind set through her long poetic speeches. Her language reinforces what we are told about her such as her class and educated background, and this depth of characterisation makes her very real to the audience. ...read more.

This has a double meaning, typical to Williams' style. Blanche hates her aging beauty, and wishes to hide it. But, on a greater scale, she wishes to avoid the 'harsh light of truth', the reality of her life. In later scenes the audience fully understands the extent of her delusions, but foreshadowing is present from the very beginning. Blanch adopts many personas during this play, in reaction to different aims or situations. She attempts to be a perfect sister figure to Stella, adopting what she thinks is the correct attitude, patronisingly commenting on 'Stella for star's 'pretty mouth'. When interacting with Mitch, and the 'Young Man', Blanche seems to be a glamorous seductress. Williams directs the actress to 'slip on' a 'dark red satin' wrapper when with Mitch, which is suggestive, and symbolic of romance and passion. ...read more.

This recurring theme is read most strongly in Williams' characterization of Blanche DuBois and the physical tropes that she employs in her pursuit of what is magical and idealized: the paper lampshade she employs to cover the harsh white light bulb in the living room, her chronically deceptive recounting of her last years in Belle Reve, the misleading letters she presumes to write to Shep Huntleigh, and a pronounced tendency toward excess consumption of alcohol. As one critic writes, "Blanche spins a cocoon linguistically for protection. Blanche creates her own fantasy world through the characters she plays, such as the damsel, southern belle or school teacher. She wears her costumes creating a fa�ade to hide behind, concealing her secrets and attempting to reach her former glory, and illustrating her narcissism and inability to relate to others in a "normal" sense. Really she is living a lie. ?? ?? ?? ?? Charlotte Dawson ...read more.