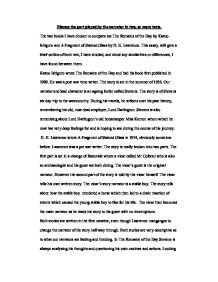 Discuss the part played by the narrator in two, or more texts. The two books I have chosen to compare are The Remains of the Day by Kazuo Ishiguro and A Fragment of Stained Glass by D. H. Lawrence.

Discuss the part played by the narrator in two, or more texts. The two books I have chosen to compare are The Remains of the Day by Kazuo Ishiguro and A Fragment of Stained Glass by D. H. Lawrence. This essay, will give a brief outline of both text, I have studied, and show any similarities or differences, I have found between them. Kazuo Ishiguro wrote The Remains of the Day and had his book first published in 1989. He was a post war time writer. The story is set in the summer of 1956. Our narrator and lead character is an ageing butler called Stevens. The story is of Stevens six day trip to the westcountry. During his travels, he reflects over his past history, remembering his old, now dead employer, Lord Darlington. Stevens is also remenising about Lord Darlington's old housekeeper Miss Kenton whom which he now has very deep feelings for and is hoping to see during the course of his journey. D. H. Lawrence wrote A Fragemnt of Stained Glass in 1914, obviously sometime before. Lawrence was a pre war writer. The story is really broken into two parts. The first part is set in a vicarge of Beauvale where a vicar called Mr Colbran who is also an archaeologist and his guest are both dining. ...read more.

She brings him food and a knife and also decides to join him, so as to help him evade capture. The next passage illustrates just how much the stable boy thought of Marther. " I lay her down till cut flat hairy boughs. I put her in my bosom on this dry bed so we swooned together through the night. I laced her round and covred her with myself so she lay like a nut within it's shell. 'Again when morning came, it was pain of cold that woke me. I groaned, but my heart was warm as I saw the heap of red hair in my arms." Both narrators had some one they loved. In Stevens case it was more love at a distance. After the departure of Miss Kenton (the old housekeeper at Darlington hall) Stevens realised that after all these years he was actually in love with her. Stevens realisation comes to little to late as Miss Kenton has now married. What makes it worse for Stevens is he now realises Miss Kenton had loved him for year but he had been too caught up in his work and sense of duty to realise it. Their relationship was one of petty squabbaling and nit picking but nevertheless this seemed to make no difference to their feelings except maybe enhanced them. ...read more.

He was a serious man who treated every aspect of his work as important as the next. He believed in order and decorum and most importantly knew where his place was when it came to class. With regards to love he was clueless not knowing when some one liked him and when someone did not. The stable boy however was slightly different. He worshipped and rememberd everthing his loved one would do for him. He cherrished marther like his last breath of air. On the other hand he was also a spiteful boy who murdered a horse not belonging to him. He was resentful towards his master who punished him for this crime, which then led to a desprate want for revenge. I thoroughly enjoyed reading both stories but for different reasons. The Remains of the Day was a sad and humorous love story and a moving and witty meditation on the democratic responsibilities of the ordinary man. It was also the poignant tale of thwarted idealism and the subtlety and grace of the characters has been duley noted. D.H. Lawrence and his short story A Fragment of Stained Glass was sensuous, passionately intense and probed deep in to uncharted feelings and experiences of human beings. Both stories however would have been unsucessfull if it had not been for the authors excellent choice of narrator. ...read more.