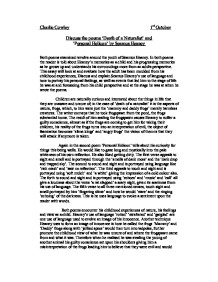 Charlie Cowley 1st October Discuss the poems 'Death of a Naturalist' and 'Personal Helicon' by Seamus Heaney Both poems examined revolve around the youth of Seamus Heaney. In both poems the reader is told about Heaney's memories as a child and his progressing memories as he grows up and understands his surroundings more from an adults perspective. This essay will look at and evaluate how the adult has been moulded from his childhood experiences, Discuss and explain Seamus Heaney's use of language and tone to portray his personal feelings, as well as events that led him to the stage of life he was at and foreseeing from his child perspective and at the stage he was at when he wrote the poems. Children are naturally curious and interested about the things in life that they are unaware and unsure of; in the case of 'death of a naturalist' it is the aspects of nature, frogs, which, to him were just the 'mammy and daddy frogs' merely harmless creatures. The writer conveys that he took frogspawn from the pond, the frogs substantial home. The result of him sealing the frogspawn causes Heaney to suffer a guilty conscience, almost as if the frogs are coming to get him for taking ...read more.

Therefore when he realised he was stealing the young of another animal his guilty conscience set upon his shoulders giving him a misinterpretation of the frogs leading him to believe that they were evil and would grasp his hand should he try to take anymore. Realistically this would never happen, but as if in another world, the imagination of a child is very powerful. In 'Personal Helicon' again he is oblivious to the reality of the farm, which to him is like a playground that needs exploring. Furthermore, a part of this exploration was to venture out and look down as many wells as he could. Heaney describes him as Narcissus, a character from Greek mythology who fell in love with his own reflection. This definition best describes both characters as Heaney would all day stare down the wells. The reader should feel curiosity and also senses Heaney's love for nature 'Fructified like any aquarium'. As children grow up their perception on things changes as they become aware of what they are unsure of. In this case it is Heaney as an adult reflecting from his adult perspective back to when he was a child. ...read more.

Also how the frogs 'invaded'. All language used to do with the war is to evoke Danger, the slime kings gathered for vengeance. The wells are described as oasis's, teeming with life, Heaney uses near rhyme to suggest this and not be convened with normal poetry or rhyming. Heaney looks back on his childhood and thinks about how fun it was to sit by the wells and how he cant do that anymore as it is 'Undignified as an adult' to still do that even though he wanted to and how the only way he can feel like he is back by the well is to write about his experiences by the well 'I rhyme to see myself' In 'Death of a Naturalist' his childhood memories had destroyed his perspective as an adult as he now realises looking back how the frogs wouldn't attack him, the mammy and daddy frogs were now just the bullfrog and frog. He now also realises how the frogs are not yellow if it is sunny and brown when it rains but only they appear to be different from the different brightness and shades of colours showing his lack of innocence in both poems. ...read more.