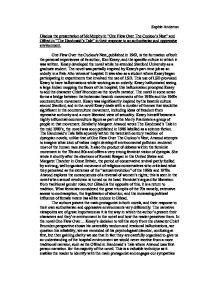 Discuss the presentation of McMurphy in &quot;One Flew Over The Cuckoo's Nest&quot; and Offred in &quot;The Handmaid's Tale&quot; in their response to an authoritarian and oppressive environment.

Sophie Anderton Discuss the presentation of McMurphy in "One Flew Over The Cuckoo's Nest" and Offred in "The Handmaid's Tale" in their response to an authoritarian and oppressive environment. One Flew Over the Cuckoo's Nest, published in 1962, is the formation of both the personal experiences of its author, Ken Kesey, and the specific culture in which it was written. Kesey developed the novel while he attended Stanford University as a graduate student. The novel was partially inspired by Kesey's part-time job as an orderly in a Palo Alto veterans' hospital. It was also as a student where Kesey began participating in experiments that involved the use of LSD. This use of LSD provoked Kesey to have hallucinations while working as an orderly. Kesey hallucinated seeing a large Indian mopping the floors of the hospital; this hallucination prompted Kesey to add the character Chief Bromden as the novel's narrator. The novel in some sense forms a bridge between the bohemian beatnik movements of the 1950s and the 1960s counterculture movement. Kesey was significantly inspired by the beatnik culture around Stanford, and in the novel Kesey deals with a number of themes that would be significant in the counterculture movement, including ideas of freedom from repressive authority and a more liberated view of sexuality. Kesey himself became a highly influential counterculture figure as part of the Merry Pranksters a group of people in that movement. Similarly Margaret Atwood wrote The Handmaid's Tale in the mid 1980's, the novel was soon published in 1986 labelled as a science fiction. ...read more.

In One Flew Over... Kesey shows the disastrous results of society's repressive forces and the attempt to secure victory for the individual. The characters in the hospital cannot cope in actual society. They have been beaten into submission, and their sense of self has been suppressed. They are like rabbits that need a fox to keep them under control. McMurphy is not permitted in a repressive society; he is strong enough to teach other patients about the forces around them. He refuses to meet the rules of conformity in an authoritarian society and he rebels against it. Chief Bromden's observations presents McMurphy on a contrast to his own silent character. His character represents the submissive man challenging members of society, which McMurphy is presented as the exact opposite in his conflict with Ratched. The conflict that Kesey depicts in the book is on two levels. The first level being between the patients especially McMurphy, and the hospital authorities especially Big Nurse. Before the arrival of McMurphy the patients are content to live under the thumb, when after the protagonist's arrival, he shows them that they are worth more than the poor treatment they are receiving. On the second level, the novel conflict with the individual, depicted in the patients, and repressive forces of society, depicted in the hospital administration. Symbolically it becomes a conflict of good versus evil. Whereas in Handmaid's Tale the conflict between the individual and society is much different, the situation Offred has been put in is more dangerous as any risks taken or caught in the act will commit her straight to ...read more.

Overall, Offred's gradual belief in herself t better her life and change her opinion of freedom leads to her decision to leave in the Eyes van, actually disguised as Mayday who have come to save her, she believes Nick and decides to leave, the build up to this decision has changed Offred's belief in her sense of self, she has regained her individuality and the decisions she has made were well thought out even though she made certain risks which could of committed her to immediate death. She has bettered lifestyle rather than continuing to conform to Gilead's authoritarian and oppressive forces. However, in One Flew Over... the novel ends in tragedy for McMurphy, the representative protagonist of the patients and the individual in society, is over come by the hospital authority. When he cannot be controlled by normal means, he is lobotomised. This act could be argued as pessimistic. However, in Atwood's "Handmaid's Tale", the novel closes with an epilogue from 2185, after Gilead has fallen, written in the form of a lecture. The professor explains the formation and customs of Gilead, and discusses the significance of Offred's story, which has turned up on cassette tapes in Bangor, Maine. He suggests Nick arranged Offred's escape but her fate after was unknown. Offred's may have escaped to another country or possibly been recaptured. In conclusion we should consider the term "outsider" becomes a term "hero" during times of mayhem and chaotic times. An accepted outsider can be an agitator in addition to a revolutionist of the common people. ...read more.