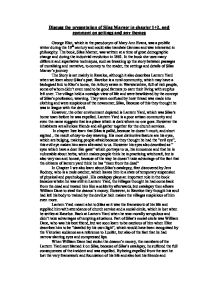 Discuss the presentation of Silas Marner in chapter 1+2, and comment on settings and any themes

Discuss the presentation of Silas Marner in chapter 1+2, and comment on settings and any themes George Eliot, which is the pseudonym of Mary Ann Evans, was a prolific writer during the 19th century and could also translate German and was interested in philosophy. The book, Silas Marner, was written at a time of great demographic change and during the industrial revolution in 1861. In the book she uses many different and superlative techniques, such as breaking up the story between passages of moralising and narrative, to convey to the reader, the settings and details of Silas Marner's journey The Story is set mainly in Raveloe, although it also describes Lantern Yard when we learn about Silas's past. Raveloe is a rural community, which may have a biological link to Eliot's home, the Arbury estate in Warwickshire, full of rich people, some of whom didn't even need to be good farmers�to earn their living with surplus left over. The village held a nostalgic view of life and were bewildered by the concept of Silas's profession, weaving. ...read more.

In Chapter 1 we also learn about Silas's catalepsy, first discovered by Jem Rodney, who is a mole catcher, which leaves him in a state of temporary suspension of physical and psychological . His catalepsy plays an important role in the book because whebn he was still in Lantern Yard, the villages thought he had come back from the dead and treated him like a celebrity afterwards, but catalepsy then allows William Dane to steal the deacon's money. However, in Raveloe they thought his soul had left his body to trained by the devil,w hich makes the villages suspicious of him even more. Lantern Yard meant a lot to Silas as it was the framework of his life and supplied him with attendance of church service and a social circle, which is lost when he settles at Raveloe. Back at Lantern Yard when he was morally scrupulous and didn't take advantages of tempting situations. Part of Silas's social circle was William Dane, who was his best friend, but we soon learn to be cautious of him when Eliot describes him to be "dazzled by his own light", which would ...read more.

It is symbolic because the graveyard is barren and dead just like him because no one knows him. Towards the end of the chapter we learn about Silas's affection towards the gold, which he has earned from all his weaving. The gold plays an important role in the story and it also means a lot to Silas because "they" are his surrogate friends would now. Gold also never loses its value which is important to Silas as this meant his "friends" wouldn't lose their worth like William Dane did. Eliot cleverly use natural imagery to describe Silas's way of life and also his state of mind, she shows us with this imagery that Silas's work are now his life and almost nothing meant more to him now. He seemed to weave, like the spider From pure impulse, without reflection These lines are really effective and help you understand Silas at this stage of the book. She also uses the imagery of a river being reduced to a little trickle, which represents Silas's life compared to his old life in Lantern Yard ...read more.