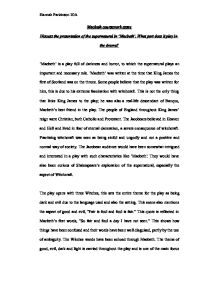 Discuss the presentation of the supernatural in 'Macbeth'. What part does it play in the drama?

Macbeth coursework essay Discuss the presentation of the supernatural in 'Macbeth'. What part does it play in the drama? 'Macbeth' is a play full of darkness and horror, to which the supernatural plays an important and necessary role. 'Macbeth' was written at the time that King James the first of Scotland was on the throne. Some people believe that the play was written for him, this is due to his extreme fascination with witchcraft. This is not the only thing that links King James to the play; he was also a real-life descendant of Banquo, Macbeth's best friend in the play. The people of England throughout King James' reign were Christian, both Catholic and Protestant. The Jacobeans believed in Heaven and Hell and lived in fear of eternal damnation, a severe consequence of witchcraft. Practising witchcraft was seen as being sinful and ungodly and not a positive and normal way of society. The Jacobean audience would have been somewhat intrigued and interested in a play with such characteristics like 'Macbeth'. They would have also been curious of Shakespeare's exploration of the supernatural, especially the aspect of Witchcraft. ...read more.

The Witches however are not the only example of the supernatural in Macbeth. Something which has a strong connection with the Witches is pathetic fallacy. A good example of this is in the opening scene. The stage directions read " Thunder and lightning. Enter three WITCHES." The thunder and lighting is physically threatening and appears to be extremely powerful, it's a very important aspect of the play. The witches are almost immediately associated to bad weather. Whenever they appear in the play the weather is negatively portrayed, and bad weather also occurs when unnatural things take place, for instance the night King Duncan was murdered. There is a strong relationship between Lady Macbeth and the supernatural, particularly the Witches and this can be seen in many different ways. This is made very clear in Act 1 Scene 5 when she says, "Come you spirits...make thick my blood." Lady Macbeth is inviting the evil spirits inside her, she wants to be rid of all human feelings of guilt and pity. This quote really proves this point " Make thick by blood, stop up th' access and passage to remorse". ...read more.

The darkness, hallucinations and the contributions from the Witches all manifest to form the plot of the play and create a hard-hitting and dramatic plot line. All the aspects of the supernatural in "Macbeth" are extremely controversial and play a very powerful role. The contributions from the witches and apparitions seem to be the main focus point throughout. In my opinion I think that all the aspects of the supernatural, the witches, prophecy, pathetic fallacy, apparitions, imagery and hallucinations really manifest and create a Scottish play full of darkness and horror. The role of the supernatural seems to be necessary and without it the play may not have such a severe impact on the audience. "Macbeth" is a play, which really appealed to the Jacobean audience and catered for their beliefs in witches and witchcraft. The Jacobean audience would have heard echoes of their Christian faith in the language and also through religious imagery. There are many modern day interpretations of Macbeth, all aimed at various groups of people. One thing that I am certain of is that the impact of the supernatural, especially the witches, is always dramatic and extreme. However, all productions of 'Macbeth' are unique, and various aspects of the play are portrayed differently. Hannah Parkinson 10A ...read more.

The candidate responds well to the set question, the essay has a good introduction and a clear conclusion, although the last sentences of the conclusion which talk about different productions of Ã¢â‚¬ËœMacbethÃ¢â‚¬â„¢ doesn't seem to fit in with the rest ...

The candidate responds well to the set question, the essay has a good introduction and a clear conclusion, although the last sentences of the conclusion which talk about different productions of Ã¢â‚¬ËœMacbethÃ¢â‚¬â„¢ doesn't seem to fit in with the rest of the essay, I would either put this in the bulk of the essay or remove it as it doesnÃ¢â‚¬â„¢t add anything.

The candidate has clearly done independent research, as they mention how people at the time would be intrigued by the idea of witchcraft and how they would find the witches and the supernatural fascinating, this is good, exactly what I would expect of a high level GCSE candidate. The candidate has carefully selected suitable quotations and used them to back up their ideas and s/he shows a good level of analysis. S/he talk about the meaning behind the quotations and how they represent the characters thoughts and feeling rather then just retelling the story, which is excellent. Although linguistic techniques such as the use of similes and metaphors are not discussed, the candidate does mention the use of pathetic fallacy, which shows a higher level of analysis and understanding.

The essay is well written and fluent. The candidate uses a good range of vocabulary throughout and generally spelling and the use of grammar is not an issue.