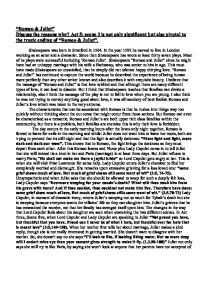 Discuss the reasons why Act 5: scene 3 is not only significant but also pivotal to the tragic ending of Romeo &amp; Juliet.

"Romeo & Juliet" Discuss the reasons why? Act 5: scene 3 is not only significant but also pivotal to the tragic ending of "Romeo & Juliet". Shakespeare was born in Stratford in 1564. In the year 1592 he moved to live in London working as an actor and a dramatist. Since then Shakespeare has wrote at least thirty seven plays. Most of he plays were successful including 'Romeo Juliet'. Shakespeare "Romeo and Juliet" since he might have had an unhappy marriage with his wife a Hathaway, who was senior to him in age. This must have made Shakespeare so unsatisfied, that he simply did not tolerate happy chirping love. "Romeo and Juliet" has continued to capture the world because he described the experience of being human more perfectly than any other writer known and also describes it with exquisite beauty. I believe that the message of "Romeo and Juliet" is that love is blind and that although there are many different types of love, it can lead to disaster. But I think that Shakespeare teaches that families can divide a relationship, also I think the message of the play is not to fall in love when you are young. I also think he was not trying to convey anything good about love, it was all mockery of how foolish Romeo and Juliet's love which was taken to the very extreme. The characteristics that can be associated with Romeo is that he rushes into things way too quickly without thinking about the out come that might occur from those actions. ...read more.

By the time the audience might have watched the scene where Juliet and her patents are arguing, it can feel almost unbearable because of what they already know. Only the kindness of the Nurse relieves the situation. And the argument ends with a chill horror of Juliet's mother turning on her daughter. "Talk not to me, for I'll not speak a word. Do as thou will, for I have done with thee." Nurse betrayed Juliet turns against her at a very critical time. The Nurse told Juliet that it would be best if she would just marry Paris "I think it best you married with the county' (3:5,230-236) But most of the adults in the play betray Juliet like Friar Lawrence who does not comprehend "Romeo and Juliet's" love for each other. Nurse fails to support Juliet's choice against marring Paris. Nurse's betrayal causes Juliet to go to Friar with the intent to commit suicide, should he be unable to help Juliet "I'll to the Friar to know his remedy. If all else fails myself have the power to die" (3:5,254-255) Friar Lawrence is the one who married Romeo and Juliet also gave Juliet the potion that made her seem dead, which consequently lead to the lover's deaths. Friar Laurence is responsible for "Romeo and Juliet's" deaths. 'Romeo and Juliet's' death could have been prevented, if they were not together. Friar Laurence married "Romeo and Juliet"; this was the first mistake which would lead to their deaths. ...read more.

Romeo then tries as hard as he can to get Paris to leave peaceably. He says, "Good gentle youth, tempt not a desperate man; / Fly hence, and leave me: think upon these gone; / Let them affright thee." (5:3.59-61) Romeo's mind it is clear that Paris has only two choices to leave or kill Paris."O my love, my wife! Death, that hath suck'd the honey of thy breath Hath had no power yet upon thy beauty." When Juliet woke up and found Romeo dead, she killed herself "O happy dagger! This is thy sheath; there rust and let me die!" She stabs herself to join her Romeo on the other side then she welcomes death. To conclude: I think in contemporary society we have women's rights in my opinion Juliet should have had her choice on who to marry and if the parents of Romeo and Juliet did not hate each other, then these problems would not happened and lead to their deaths. But in the Elizabethan times they would disagree with me because they had to obey. The thing that Juliet did wrong is that she didn't tell her father about her love with Romeo and that would have been the most dangerous thing she could do. I think, the more you learn about Shakespeare the more you can appreciate his work and his plays. I adore Shakespeare, especially some of his insults - they are hilarious, and so clever. I have always had a soft spot for star-crossed lovers. What an amazingly talented author Shakespeare was. It was incredible four hundred years ago and it is still wonderful today. ...read more.