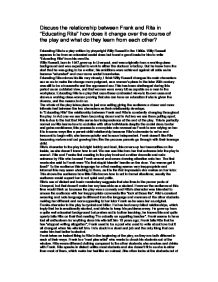 Discuss the relationship between Frank and Rita in Educating Rita how does it change over the course of the play and what do they learn from each other?

Discuss the relationship between Frank and Rita in "Educating Rita" how does it change over the course of the play and what do they learn from each other? Educating Rita is a play written by playwright w***y Russell in the 1980s. w***y Russell appears to be from an educated social class but found a good basis for him to write "Educating Rita" from his own life. w***y Russell, born in 1947,grew up in Liverpool, and was originally from a working class background and was expected to work in either the docks or a factory. But he knew from the start that he was going to be a writer; his ambitions were achieved against all odds as he became "educated" and over came social boundaries. Educating Rita mirrors his life very closely; I think w***y Russell changes his main characters s*x so as to make the change more poignant, as a women's place in the later 20th century was still to be a housewife and the oppressed s*x.This has been challenged during this period as an outdated view, and that women were every bit as capable as a man in the workplace. Educating Rita is a play that uses these contrasted views to its own uses and shows a working class woman proving that she can have an education if she is given the chance, and the means to do so. ...read more.

This suggests that they are fairly close in order for Frank to be confident enough to make a flirty remark to Rita. Frank seems to need Rita in Act one; he seems her as something new, vibrant "a breath of fresh air" Their relationship at this point is very social in Act one, as they both need each other. Rita needs Frank to tutor her and to also support her and give her guidance. Rita is very adolescent at first and looks to Frank for answers because he is "educated". Rita isn't too dependent on Frank at first but with the domestic difficulty at home she is pushed towards Frank for comfort and self-confidence. She admits to Frank "In this room I feel safe, with you Frank" This shows the audience that they have more than a professional relationship; this quote implies that they are friends because friends always feel safe amongst each others company when they look for comfort and support. During this period frank has stopped drinking, or at least cut down. This shows that Rita is having an influence over him, and that she is giving him something to care for in life other then just drinking his life away. ...read more.

It is crucial for Rita's character to have confidence in this play because without it she would have "packed it in" and never completed her course or be able to be an independent woman. These new changes in Rita are reflected in her new personality in Act two as she sees the world through different eyes. She has become very mature, and can now see through people's pretentiousness. She used to look up to her friend Trish, yet has realised she is not what she seems "I thought she was so cool an' together... she spends half her life eatin' whole foods an' health foods to make her live longer, an' the other half tryin' to kill herself" Frank learns a lot from Rita as well, he learns to appreciate things from another perspective "Assonance is getting the rhyme wrong". This relationship with Rita has also made Frank see that he should be more independent too because people change for good and for bad, despite Rita's criticism Frank also learns from this. He learns how to improve himself into a better person and change his flaws as Rita pointed out that he was too "jealous". Their relationship at Act two scene seven is similar to the one they had in the middle of the play but the difference is now they are both truly independent individuals, they like and only need each other out of choice. ...read more.