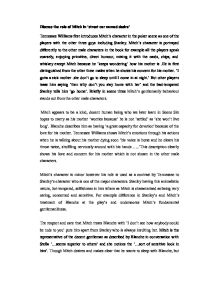 Discuss the role of Mitch in 'street car named desire' Tennessee Williams first introduces Mitch's character in the poker scene as one of the players with the other three guys including Stanley. Mitch's character is portrayed differently to the other male characters in the book for example all the players speak coarsely, enjoying primitive, direct humour, mixing it with the cards, chips, and whiskey except Mitch because he 'keeps wondering' how his mother is .He is first distinguished from the other three males when he shows his concern for his mother. 'I gotta a sick mother .she don't go to sleep until I come in at night.' But other players tease him saying 'then why don't you stay home with her' and the bad-tempered Stanley tells him 'go home'. Briefly in scene three Mitch's gentlemanly behaviour stands out from the other male characters. Mitch appears to be a kind, decent human being who we later learn in Scene Six hopes to marry as his mother 'worries because' he is not 'settled' as 'she won't live long'. ...read more.

In fact, Mitch is the only person other than Stella who seems to understand the tragedy of Blanche's madness. Later on in scene three another aspect of Mitch is revealed as he meets Blanche DuBois. Blanche is quick to notice the hint of sensitivity in him that makes him seem superior to the others which she mentions to Stella after meeting him the first time in scene three. She says that he'...seems superior to others' and he has a '...sort of sensitive look in him' which in his eyes sets him apart from the others guys. Blanche asks Stella if he is 'married' and his occupation. This suggests that perhaps Blanche is attracted to him because of sensitivity which she is looking for and Mitch is the representative of the decent gentleman who could save Blanche from the past that she is trying to escape. Although Mitch has this sensitivity and gentlemanliness in him he lacks Blanche's romantic perspective and spirituality, as well as her understanding of poetry and literature. ...read more.

Mitch admits his loneliness and need 'you need somebody and I need somebody too, could it be -you and me ...'.This suggests his honesty and understanding of Blanche's past. However Mitch appears to be a kind, caring and gentlemen because in the rough society of men like Stanley, Mitch is considered a valuable discovery. Blanche chooses Mitch because he is the only choice left to give her some hope of happiness and joy of life. Once he discovers the truth about Blanche's distasteful s****l past when he arrives to chastise her is, he is both angry and embarrassed about it and his actions are violent towards her. He states that he feels he deserves to have s*x with her, even though he no longer respects her enough to think her fit to be his wife. Through his negative actions, it makes us feel sympathy for Blanche as he also mentions that she is not 'clean enough for his mother'. His rejection of Blanche is perhaps also a cause of her madness as well as her r**e as she is left with no hope of her future. ...read more.

A well considered response, which includes many quotations and references. Occasionally, it is too descriptive and needs to explore Mitch's significance/dramatic function more fully. The ending is very abrupt and needs more consideration in terms of a final comment. ***