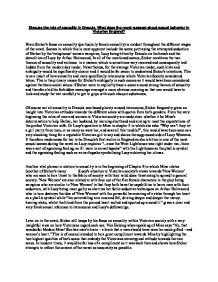 Discuss the role of sexuality in Dracula. What does the novel suggest about sexual behavior in Victorian England?

Discuss the role of sexuality in Dracula. What does the novel suggest about sexual behavior in Victorian England? Bram Stoker's focus on sexuality (particularly female sexuality) is evident throughout the different stages of the novel. Scenes in which this is most apparent include the scene portraying the attempted seduction of Harker by the 'voluptuous' woman vampires, Lucy being bitten by Dracula on the bench and the demolition of Lucy by Arthur Holmwood. In all of the mentioned scenes, Stoker combines the two themes of sexuality and violence in a manner which is sometimes very reserved and consequently well hidden from the modern day reader. Nevertheless, for the average Victorian reader, such hints and ambiguity would be significantly clearer and it would be far easier to understand Stoker's intentions. This is as a result of how sexuality and more specifically intercourse which Victorian Society considered taboo. This is the primary reason for Stoker's ambiguity in such scenes as it would have been considered against the basic social values if Stoker were to explicitly base a scene around strong themes of sexuality and therefore hid his forbidden meanings amongst a more obvious meaning so that one would have to look and study the text carefully to get to grips with such obscure substances. Of course not all sexuality in Dracula was based plainly around intercourse, Stoker frequently gives an insight into Victorian attitudes towards the different sexes with quotes from both genders. ...read more.

Van Helsing when speaking of Mina says "Ah, that wonderful Madam Mina! She has man's brain - a brain that a man should have were he much gifted - and woman's heart." This is of course intended to be a great compliment towards Mina by highlighting the two highest qualities of both sexes that embody the Victorians stereotypical attitude towards the two sexes. In modern times, it would be far less of a compliment as it was back then and shows how Stoker attempts to reflect the context of the novel as accurately as possible. Most criticism of Dracula sees the novel in terms of suppressed sexual instincts coming to the surface. The novel draws an implied analogy between vampirism and sex. The Count can only go where he is first invited, meaning that his female victims desire him to penetrate them. This act of penetration draws blood, like the 'deflowering' of a virgin bride. After the act, the woman looks unnaturally flushed and healthy, though after repeated penetration, she becomes drained of blood and anemic. The exchange of bodily fluids (blood in the case of vampiric attacks) is another similarity with sex. Once corrupted by the Count's attentions, the women (Lucy is an example) is transformed from pure and virtuous creature to a lascivious, bestial predator who is driven to lure men to their destruction. ...read more.

Lower and lower went her head as the lips went below the range of my mouth and chin and seemed to fasten on my throat... I could feel the soft, shivering touch of the lips on the supersensitive skin of my throat, and the hard dents of two sharp teeth, just touching and pausing there. I closed my eyes in a languorous ecstacy and waited - waited with beating heart." (Chapter 3) This is the most-discussed episode in the novel. At Count Dracula's castle, Jonathan Harker has a vision or dream (he is unsure which) in which he is seduced by three vampire women. The vampiric tradition of blood-sucking is symbolic of the exchange of bodily fluids during sex. For Stoker, writing in the sexually repressed Victorian age, vampirism is a convenient metaphor for sex and the closest he could get to writing about sex in a 'respectable' novel. The seduction incident is remarkable for the reversal of traditional gender roles: Harker is a passive victim, peeping out under his eyelashes like a coy young girl, while the vampire women are sexually aggressive predators. In Victorian Britain, a sexually aggressive woman was seen as a threat to the very fabric of society, so Stoker's characterisation of such women as death-dealing vampires is apt. Harker's longing for, and yet revulsion to the women illustrates the deeply ambiguous attitude of Victorian society towards the female sexual appetite. ...read more.