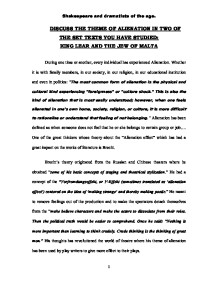 Discuss the Theme of Alienation In Two of the

DISCUSS THE THEME OF ALIENATION IN TWO OF THE SET TEXTS YOU HAVE STUDIED: KING LEAR AND THE JEW OF MALTA During one time or another, every individual has experienced Alienation. Whether it is with family members, in our society, in our religion, in our educational institution and even in politics: "The most common form of alienation is the physical and cultural kind experiencing "foreignness" or "culture shock." This is also the kind of alienation that is most easily understood; however, when one feels alienated in one's own home, society, religion, or culture, it is more difficult to rationalize or understand that feeling of not belonging." Alienation has been defined as when someone does not feel that he or she belongs to certain group or job.... One of the great thinkers whose theory about the "Alienation effect" which has had a great impact on the works of literature is Brecht. Brecht's theory originated from the Russian and Chinese theaters where he obtained "some of his basic concepts of staging and theatrical stylization." He had a concept of the "Verfremdungseffekt, or V-Effekt (sometimes translated as 'alienation effect') centered on the idea of 'making strange' and thereby making poetic." He meant to remove feelings out of the production and to make the spectators detach themselves from the "make believe characters and make the actors to dissociate from their roles. Then the political truth would be easier to comprehend. Once he said: "Nothing is more important than learning to think crudely. ...read more.

He is alienated from his own daughters as what he thought them to be they were not. He is unable to digest the fact that his living has become futile and that he has become alienated from 'living' itself: "The human condition is a bare, harsh, and lonely existence, which Lear brilliantly illustrates. Existence for Lear is similar to that of a great oak tree, at one point filled with life; however, the human condition will not allow that oak to escape existence forever. It is only a matter of time before the leaves fall off and nothing remains but the skeleton of a tree once filled with ripeness. The skeleton is now open to the harsh cold winds of existence:""In the twentieth century, feelings of alienation and absurdity have arisen that tend to shift the focus to King Lear. All virtuous or evil actions, all acceptances or rejections of religious or political ideology seem equally absurd" [10] King Lear's madness shows his alienation from the his own self as he is unable to bear the reality of what has happened to him and the guilt of having banished Cordelia. He also becomes spiritually alienated when: "He believes that he can find substance in forgiveness, prayer, and companionship; his angst causes him to believe that he can contemplate the mysterious nature of God." He becomes alienated from his knowledge of the existence of god when at last he has to gain consciousness: "of the violent indifference of nature is consciousness of a godless world. ...read more.

Barabas is made by Marlowe to be alienated from faith in the terrestrial world when he loses his gold: "Gold symbolizes faith in the terrestrial world-its schemes, profits and rewards-as opposed to the spiritual realm's less immediate rewards" Barabas thinks that if he has that gold, he is powerful and on lost of it he feels alienated as he cannot accept the reality that he will no longer have that power. He is alienated from basis standard ethics and moral values as he does not seem to be able to control his revengeful nature. He seems unable to distinguish between good and evil and alienates himself from the right moral values. King Lear by Shakespeare and the Jew of Malta by Christopher Marlow have in a sense, different ways of presenting the theme of alienation of their characters. For King Lear, madness and disillusionment is the main cause for alienation and this alienation is used as a means for the king to see reality and to ask for redemption. It is only from alienating himself from others and his own self that king Lear can reach the stage of true knowledge and can repent for his deeds. In the Jew of Malta the alienation of Barabas by the society further pushes him down the road of evil and moral alienation instead of redemption. He does not feel the need to make himself more trustworthy and a better person and instead of trying to show to the audience that he can be good and that they treating him as an alien is wrong, he feels enraged and commits crimes. ...read more.