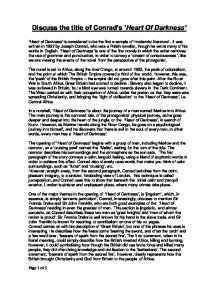 DIscuss The Title Of Conrad's 'Heart Of Darkness'

Discuss the title of Conrad's 'Heart Of Darkness' 'Heart of Darkness' is considered to be the first example of 'modernist literature'. It was written in 1902 by Joseph Conrad, who was a Polish novelist, though he wrote many of his works in English. 'Heart of Darkness' is one of the first novels in which the writer removes the use of grammar and punctuation, in order to convey a 'stream of consciousness', like we are viewing the events of the novel from the perspective of the protagonist. The novel is set in Africa, along the river Congo, at around 1902, the peak of colonialism, and the point at which The British Empire covered a third of the world. However, this was, the 'peak' of the British Empire - the empire did not grow after this point. After the Boer War in South Africa, Great Britain had started to decline. Slavery also began to decline, it was outlawed in Britain, but a blind eye was turned towards slavery in the Dark Continent. The West carried on with their occupation of Africa, under the pretence that they were was spreading Christianity, and bringing the 'light of civilisation' to the 'Heart of Darkness', i.e. Central Africa. In a nutshell, 'Heart of Darkness' is about the journey of a man named Marlow into Africa. ...read more.

it could symbolising how though the British did use brute force and killed many people, they did often bring knowledge and civilisation to the 'barbarians'. The second statement, 'bearers of spark from the sacred fire', however, clearly represents how the British brought Christianity and God from Britain to the people of Africa. Conrad also implements the use of bathos, undermining the rest of the paragraph, which is very jingoistic, all about the greatness of the empire. The bathos of which I am referring to is 'The dreams of men, the seed of commonwealths, the germs of empires.' The use of the word 'germs' is very negative, and, in a way, 'cancels out' all of the writing before. The next section of the novel that I wish to examine is known as the 'Grove of Death'. It is a description of Marlow's initial impressions and observations of the Outer Station, and all the slave labour going on. As he sees the land around him, he notices many 'mounds of turned up earth', and 'wastes of excavations', he speaks of the land as if it has been 'raped' of all its resources, and left as a barren wasteland. His first impressions of the African slave workers seems racist, as he compares there black, naked bodies to ants, however, it is more likely that this is just a reference to the futility and uselessness of the work that is going on. ...read more.

As he goes towards the trees for shade, he instantly regrets it, making a direct reference to 'Dante's Inferno'. Dante's Inferno is one perception of what hell would be like. His vision of hell consists of seven rings, each ring containing people who have sinned a particular way, with the rings varying degrees of punishment. He looks around, noticing the slaves, 'objectifying' them as 'black shapes'. He makes an ironic comment, calling the slaves 'helpers' and stating how they have 'withdrawn to die'. He talks about how they have been abandoned in a very understating way. There is another reference to Dante's Inferno here, as he notices the 'black shadows of disease and starvation'. Marlow then leaves the trees, but looks down to see a black slave, who has a white thread around his neck. He is startled at how strange and out of place it looks on the black skin. This is symbolic of the white men of the empire being out of place in Africa. To conclude, the 'Heart of Darkness' within the play refers to the inner capability to commit evil acts in all men, and the evil of the empire underneath the front of 'spreading civilisation and the light of Christianity'. The two sections of the novel which I have chosen to examine are full of symbolic imagery, referring to the title, and raising questions in the readers mind about the greatness of Britain. ?? ?? ?? ?? Page 1 of 3 ...read more.