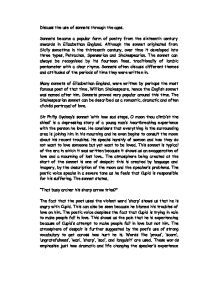 Discuss the use of sonnets through the ages.

Discuss the use of sonnets through the ages. Sonnets became a popular form of poetry from the sixteenth century onwards in Elizabethan England. Although the sonnet originated from Sicily sometime in the thirteenth century, over time it developed into three types, Petrachan, Spenserian and Shakespearian. The sonnet can always be recognised by its fourteen lines, traditionally of iambic pentameter with a clear rhyme. Sonnets often discuss different themes and attitudes of the periods of time they were written in. Many sonnets of Elizabethan England, were written by perhaps the most famous poet of that time, William Shakespeare, hence the English sonnet was named after him. Sonnets proved very popular around this time. The Shakespearian sonnet can be described as a romantic, dramatic and often clich�d portrayal of love. Sir Philip Sydney's sonnet 'with how sad steps, O moon thou climb'st the skies!' is a depressing story of a young man's heartbreaking experience with the person he loves. He considers that everything in the surrounding area is joining him in his mourning and he even begins to consult the moon about his recent troubles. He speaks harshly of women and how they do not want to love someone but yet want to be loved. This sonnet is typical of the era in which it was written because it shows us an exaggeration of love and a mourning of lost love.. The atmosphere being created at the start of the sonnet is one of despair; this is created by language and imagery, by the description of the moon and the speaker's problems. The poetic voice speaks in a severe tone as he feels that Cupid is responsible for his suffering. The sonnet states, "That busy archer his sharp arrow tries?" The fact that the poet uses the violent word 'sharp' shows us that he is angry with Cupid. This can also be seen because he blames his troubles of love on him. ...read more.

In these two quatrains he elevates his deceased wife by comparing her to a saint and Alcestis. Then in the last six lines there is another quatrain and a final couplet. In the third quatrain the poetic voice speaks about his wife's appearance as she walks towards him in his dream. The turn occurs here in the sonnet because before this turn he believed he was with his wife and it was only after this turn that he realises that in fact she is not there. In the final couplet he realises that his wife is not really with him but that she is only in his dream. The sonnet "On his deceased wife" shows us that the speaker loves his wife so much and he misses her. This is a celebration of true love in marriage. Throughout the first three quatrains there is a sense of happiness and contentment. This is because the poet believes he sees his wife and it is only in the final couplet that he realises that she is not there. This is where the tone changes and becomes full of sadness. This writers of the Romantic period were often very focussed on the natural world. A writer at this time was William Wordsworth. William Wordsworth wrote the sonnet 'The world is too much with us' in the 18th Century. This poem is about how we have turned our back on nature and the poetic voice is not impressed by how we have become so materialistic and no longer appreciate the natural world. The natural world is elevated and by turning our back on it the speaker tell us we are missing so much. The poetic voice uses language and imagery to get across how much we don't appreciate the natural world and what we are missing. This can be seen when the text states, "The world is too much with us". ...read more.

The poet also uses alliteration to furture his admiration for his room by saying "pitch pine" the sound quickens the pace up and shows excitement and love of his room. The poet also uses internal rhyme in the sonnet to further show the security of the room "hutch and hatch" These words remind us of rabbits huts because they are secure and safe and this can be compared to how he feels about the room. The structure of the sonnet starts off with an octave and in the first eight lines he describes his admiration for his room and how he opposes to getting a skylight. The octave is about his point of view until the turn and we see the second side of the argument. In the sestet at the end of the sonnet his views completely change and he thinks that the skylight is the best thing that has ever happened. There is no set rhyme or rhythm in this sonnet as this was a time of experimentation. The tone in the sonnet changes, at the start it is anger, hatred and sadness because his loves his room and doesn't want anything done to it. "The skylight" is a typical sonnet from this time because there is no set form. The poem is a celebration of change and new life. The sonnets have changed a lot throughout the centuries. The sonnets have experienced influences from love, religion, politics and nature. These influences have changed the form of the sonnets. The sonnets follow a different rhyme path depending of the period in which they were written, for example this rhyme pattern is typical of the Elizabethan period i.e. AB/BA/AB/BA/CD/CD/EE. Most sonnets follow the form of Iambic pentameter, which is a stressed syllable, followed by an unstressed syllable repeated five times in a line. The sonnets tend also to consist of an octave, a turn or Volta, a sestet. The sonnet consists of three quatrains and a final couplet. The final couplet can on occasion be rhyming. Since the 16th Century the use of sonnets has become widely popular among poets. ...read more.