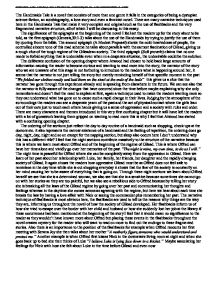 Discuss The Variety Of Narrative Technique In The Handmaid's Tale

Discuss The Variety Of Narrative Technique In The Handmaid's Tale The Handmaids Tale is a novel that consists of more than one genre it falls in the categories of being a dystopian science fiction, an autobiography, a love story and even a feminist novel. There are many narrative techniques used here in the Handmaids Tale that make it very complex and original such as the use of flashbacks and the very fragmented narrative structure, all of which I will be discussing in this essay. The significance of the epigraphs at the beginning of the novel I feel set the readers up for the story about to be told, as the first epigraph (Genesis,30:1-3) talks about the use of the Handmaids by trying to justify the use of them by quoting from the bible. The second epigraph (A Modest Proposal) shows the cold-heartedness of people, the controlled sincere tone of this mad scheme he talks about parallels with the earnest fascination of Gilead, giving us a rough clue of the tough regime of the Gileadean society. ...read more.

There are many characters and themes introduced in this very first confusing chapter but it will have left the readers with a lot of guesswork leaving them gripped on wanting to read more this is why I feel that Atwood has started with a confusing opening chapter. The ordering of the sections just reflect the day to day routine of a handmaid such as shopping, check ups at the doctors etc. it also represents the narrow existence of a handmaid and the feeling of repetition, the ordering does go day, night, day, night and so on except for the napping section, but sleep also occurs here I don't understand why this has a different title? I feel that the night sections contribute massively to the structure of the narrative because this is where we learn most about Offred and of the beginning of the regime of Gilead. This is where Offred can have her time alone and vividly go over her memories of the past "The night is mine, my own time, to do as I will." ...read more.

Her flashbacks inform us of how she tried to escape over the border with her child and husband or how she suddenly lost her job at the library if these occurrences had been mentioned at the beginning of the story I feel that it would mean no significance to the reader as they wouldn't have known more about Offred but placing these events in the flashbacks throughout the novel creates mystery for the reader who will want to read on more to find out the endings to these fragmented stories. Also there is an importance to the position of the flashbacks for example when Offred recounts her first meeting with Serana Joy she then talks about her mother "A motherly figure,someone who would understand and protect me." Another example is when Offred first kisses Nick in the downstairs living room at night and when she goes back up to bed she then thinks of Luke "I believe Luke is lying face down in a thicket." Maybe associating her feelings for Nick with how she felt about Luke in the time before Gilead and even now ...read more.