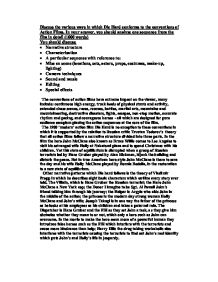 Discuss the various ways in which Die Hard conforms to the conventions of Action Films. In your answer, you should analyse one sequence from the film in detail

Discuss the various ways in which Die Hard conforms to the conventions of Action Films. In your answer, you should analyse one sequence from the film in detail (1000 words) You should discuss: * Narrative structure * Characterisation * A particular sequence with reference to: * Mise en scene (locations, sets, actors, props, costumes, make-up, lighting) * Camera techniques * Sound and music * Editing * Special effects The conventions of action films have extreme impact on the viewer, many include: continuous high energy, truck loads of physical stunts and activity, extended chase scenes, races, rescues, battles, martial arts, mountains and mountaineering, destructive disasters, fights, escapes, non-stop motion, accurate rhythm and pacing, and courageous heroes - all which are designed for pure audience escapism placing the action sequences at the core of the film. The 1988 'modern' action film Die Hard is no exception to these conventions in which it is supported by the relation to Russian critic Tzvetan Todorov's theory that all action films follow a narrative structure divided into three parts. In the film the hero John McClane also known as Bruce Willis comes to Los Angeles to visit his estranged wife Holly at Nakatomi plaza and to spend Christmas with his children. ...read more.

The hero's journey is one of excitement and underlies mythic structures in typical hero journeys, but John McClane's journey is different, he doesn't actually leave the building and so it is stereotyped as a mental journey throughout his escape from the terrorists, and a journey to his wife to save her. In action films, movie producer Joel Silver is known to have carried through his 'Whammo' theory, which according to Silver provide an adrenalin rush and gives the film a sense of forward motion. Yet it is followed with the 'Zinger' theory, which are funny lines and ease the tension adding light heartedness to the script. In the film a certain sequence of action nicknamed the 'Jump' scene, is where John McClane jumps off the top of the roof at Nakatomi plaza to escape the false hero the FBI who think he is a terrorist when he starts shooting to encourage the hostages downstairs. The scene is set purposely at the top of the building in Los Angeles at nighttime; this has the effect of showing the height in a big city such as L.A. and how dangerous it is for the hero. When John McClane jumps off the building in darkness it gives a feeling that he is jumping into the unknown. ...read more.

As the roof of the building is blown up the hose reel detaches and falls 30 stories while John has still got it around his waist, it tries to pull him to his death, showing not only the actors can threaten his life, but props as well. Camera techniques show aerial shots of the helicopter seen from above, below and inside to show the authority and high tech world. A reaction shot from a bad guy brings John into the picture and is telling of the hero coming to save the day again. A high angle long shot pronounces John as small and an easy target. Sequence cuts are made between different locations, the helicopter, roof and Hans, it builds up suspense seeing different areas of the building as the audience know what to expect but the actors don't. After John jumps from the building the editing is sped up emphasising the urgency of what has just happened. Also the point of view shot puts the audience in John's position as there is the possibility that he might fall. Finally an extreme long shot of the building as the roof explodes emphasises the spectacular quality of the explosion. All these things are typical conventions of an action film and are effective in that way of making it a modern action film. ...read more.