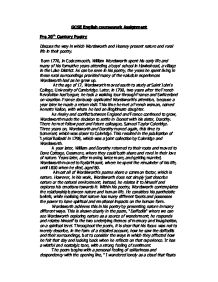 Discuss the way in which Wordsworth and Heaney present nature and rural life in their poetry.

GCSE English coursework Assignment Pre 20th Century Poetry Discuss the way in which Wordsworth and Heaney present nature and rural life in their poetry. Born 1770, in Cockermouth, William Wordsworth spent his early life and many of his formative years attending a boys' school in Hawkshead, a village in the Lake District. As can be seen in his poetry, the years he spent living in these rural surroundings provided many of the valuable experiences Wordsworth had as he grew up. At the age of 17, Wordsworth moved south to study at Saint John's College, University of Cambridge. Later, in 1790, two years after the French Revolution had begun; he took a walking tour through France and Switzerland on vacation. France obviously captivated Wordsworth's attention, because a year later he made a return visit. This time he met a French woman, named Annette Vallon, with whom he had an illegitimate daughter. As rivalry and conflict between England and France continued to grow, Wordsworth made the decision to settle in Dorset with his sister, Dorothy. There he met fellow poet and future colleague, Samuel Taylor Coleridge. Three years on, Wordsworth and Dorothy moved again, this time to Somerset, which was closer to Coleridge. This resulted in the publication of 'Lyrical Ballads' in 1798, which was a joint collection by Coleridge and Wordsworth. A year later, William and Dorothy returned to their roots and moved to Dove Cottage, Grasmere, where they could both share and revel in their love of nature. Years later, after moving twice more, and getting married, Wordsworth moved to Rydal Mount, where he spent the remainder of his life, until 1850 when he died, aged 80. Almost all of Wordsworth's poems share a common factor, which is nature. However, in his work, Wordsworth does not simply just describe nature or the natural environment; instead, he relates it to himself and explores his emotions towards it. ...read more.

Within these lines Wordsworth uses a simile, in which he compares himself to a horse, "like an untired horse". This creates an image of an untired horse, which is then emphasised by saying the skaters, like a horse are, "shod with steel". This simile continues into the next phase of the poem as Wordsworth goes on to liken the ice skating with his friends and the games they play to a hunt. "All shod with steel We hissed along the polished ice in games Confederate, imitative of the chase And woodland pleasures, the resounding horn, he pack loud bellowing, and the hunted hare." This comparison of the skaters to a hunt and all its elements such as the speed, the horns and the bloodthirsty dogs, accentuates and captures the speed, noise and confusion of the people skating on the ice. To create imagery for the reader Wordsworth also uses the literary technique of onomatopoeia; he does this by writing the skaters, "hissed along the polished ice". He also uses alliteration in describing the, "hunted hare". These literary techniques combine together to convey the exhilaration of skating and the excitement Wordsworth feels from it. After describing the fun and games of the skaters and himself, Wordsworth goes on to describe his surroundings, again resorting back to the influence of nature and his imaginative response to it. He imagines strange, perturbing noises that he envisages as coming from the earth and nearby mountains. "Meanwhile, the precipices rang aloud; The leafless trees and every ice crag Tinkled like iron; while the distant hills Into the tumult sent an alien sound Of melancholy, not unnoticed; while the stars, Eastward, were sparking clear, and in the west The orange sky of evening died away." These sounds remind Wordsworth of the presence of nature and, as he contemplates this, the tone of the poem changes. It goes from being lively to very calm, pensive and reflective. ...read more.

The poem, "Digging" and other poems from Heaney's collection, "Death of a Naturalist", such as "Follower" are concerned with praising and admiring his family's farming skills - his father's digging and ploughing and his grandfather's turf-cutting. However the poems also draw a contrast between their skill and Heaney's lack of it in those areas of life. What comes between Heaney and the generations before him is education; Heaney won a scholarship to a boarding school, which he attended for six years and consequently became an academic, whereas his family were uneducated and lived a very rural life. This made him extremely conscious of growing away from his family and his roots. We can see from his poetry that Heaney feels a sense of separation from his family and rural background. He has cut himself from his roots and in doing so cut himself off from the source of inspiration for his first collection of poetry. In the poems about his family, Heaney is almost like a detached observer- he is distant and unemotional in the accounts he gives. This is shown clearly through the calm manner in which he gives an account of his younger brother's death in the poem, "Mid-Term Break". This poem finishes with a very matter-of-fact tone, with little or no emotion, ".....Snowdrops And candles soothed the bedside; I saw him For the first time in six weeks. Paler now, Wearing a poppy bruise on his left temple, He lay in the four foot box as in his cot. No gaudy scars, the bumper knocked him clear. A four foot box, a foot for every year." To conclude, we can see that Wordsworth's and Heaney's poetry shares many similarities. Both poets explore the transition from childhood to adulthood in depth, focusing on the factors which affect this journey. In particular, they both concentrate on the relationship between the natural world and a rural life and how influential it can be in the formation of a person's character. ...read more.

Excellent response to the given question as this candidate explores various ways in which rural life is portrayed within the works of both poets. It was particularly pleasing to see links between the two explored beyond the superficial; one should ...

Excellent response to the given question as this candidate explores various ways in which rural life is portrayed within the works of both poets. It was particularly pleasing to see links between the two explored beyond the superficial; one should not simply discuss Heaney then discuss Wordsworth. A high standard essay will create a level of cohesion and synthesis between the two, much like this.

Very high, a variety of poetic techniques have been expored in the works of both writers which is always advised. Once again I enjoyed the depth of analysis, for example this essay does not simply state a poetic technique, but explores the rhyme and reason (excuse the pun) behind it. This shows the examiner a literary awareness which should gain high marks.

No issues here as spelling, grammar and punctuation are all fine. Equally, sentence structure and the overall composition of the essay should be noted by potential candidates as it proves effective throughout.