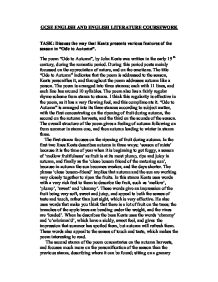 Discuss the way that Keats presents various features of the season in &quot;Ode to Autumn&quot;.

GCSE ENGLISH AND ENGLISH LITERATURE COURSEWORK TASK: Discuss the way that Keats presents various features of the season in "Ode to Autumn". The poem "Ode to Autumn", by John Keats was written in the early 19th century, during the romantic period. During this period poets mainly focussed on the appreciation of nature, and on the emotions. The title "Ode to Autumn" indicates that the poem is addressed to the season, Keats personifies it, and throughout the poem addresses autumn like a person. The poem is arranged into three stanzas; each with 11 lines, and each line has around 10 syllables. The poem also has a fairly regular rhyme scheme from stanza to stanza. I think this regularity is effective in the poem, as it has a very flowing feel, and this compliments it. "Ode to Autumn" is arranged into its three stanzas according to subject matter, with the first concentrating on the ripening of fruit during autumn, the second on the autumn harvests, and the third on the sounds of the season. ...read more.

He also uses words that make you think that there is a lot of fruit on the trees; the branches of the apple trees are bending under the weight, and the vines are 'loaded'. When he describes the bees Keats uses the words 'clammy' and 'o'erbrimm'd', which have a sickly, sweet feel, and gives the impression that summer has spoiled them, but autumn will refresh them. These words also appeal to the senses of touch and taste, which makes the poem interesting to read. The second stanza of the poem concentrates on the autumn harvests, and focuses much more on the personification of the season than the previous stanza, describing where it can be found; sitting on a granary floor, as grain is harvested in the autumn, asleep in a half harvested field unable to continue to cut the crops because the smell of poppies has made it drowsy, carrying corn on its head across a stream, like the men who collect corn after the reapers, and beside a cider press, watching cider being made - another autumn activity. ...read more.

He uses the words 'wailful' and 'mourn' to describe some of the sounds made by the animals, which create a sad feeling, as if they are sad that autumn is coming to an end. Overall the poem has a very flowing feel, starting at the beginning of autumn and ending as it draws to a close. The poem is particularly effective because of the feel of many of the words used, as they appeal to senses other than just sight, particularly the words describing the fruit in stanza one. The images created of mossy trees bending under the weight of juicy ripe fruit, I think were the most effective, as they appealed to almost all the senses, and it almost feels as if you are there. The picture of autumn created in "Ode to Autumn" is a very different one to the one of today; harvests are no longer carried out by hand, and most farm work is carried out by machinery. The poem creates a much more traditional, country image of autumn that is seen today, two centuries later. ...read more.