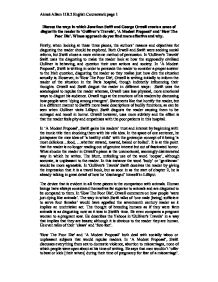 Discuss the ways in which Jonathon Swift and George Orwell create a sense of disgust in the reader in 'Gulliver's Travels', 'A Modest Proposal' and 'How The Poor Die'. Whose approach do you find more effective and why.

Discuss the ways in which Jonathon Swift and George Orwell create a sense of disgust in the reader in 'Gulliver's Travels', 'A Modest Proposal' and 'How The Poor Die'. Whose approach do you find more effective and why. Firstly, when looking at these three pieces, the authors' reasons and objectives for disgusting the reader should be explored. Both Orwell and Swift were seeking social reform, but Swift chose a more extreme method of persuasion. In 'Gulliver's Travels' Swift uses the disgusting to make the reader look at how the supposedly civilised Gulliver is behaving, and question their own actions and society. In 'A Modest Proposal', Swift is writing in order to persuade the reader to consider a proper answer to the Irish question, disgusting the reader so they realise just how dire the situation actually is. However, in 'How The Poor Die', Orwell is writing initially to inform the reader of the situation in the Paris hospital, though indirectly influencing their thoughts. Orwell and Swift disgust the reader in different ways: Swift uses the scatological to repulse the reader whereas, Orwell uses less physical, more emotional ways to disgust his audience. Orwell tugs at the emotions of his readers by discussing how people were 'dying among strangers'. ...read more.

He even talks of their 'claws' and 'fore-feet'. 'How The Poor Die' and 'A Modest Proposal' both deal with socially taboo or unpleasant subjects that would repulse readers. In 'A Modest Proposal', Swift discusses everything from sex to domestic violence, abortion to miscarriages, none of which people were open about at his time of writing. He says that men wouldn't 'offer to beat or kick [their wives] during their time of pregnancy for fear of a miscarriage'. Orwell's writing is about death, a topic that would not usually have been discussed in the conversational manner he uses. The use of hyperbole in Swift's writing adds to the sense of repulsion felt by the reader. In 'A Modest Proposal', he doesn't simply state that we should eat babies, but goes on and on with more gruesome ideas. He suggests recipes and even recommends 'flaying the carcass' to make 'admirable gloves... and summer boots', all of which is simply revolting to the reader. In 'Gulliver's Travels' he goes into explicit detail about the most disgusting of bodily functions as in Lilliput where he cannot resist putting in that his faeces was 'carried off in wheelbarrows'. Orwell doesn't exaggerate in 'How The Poor Die' but simply emphasises and reiterates his point on the disgraceful lack of respect shown for the lives of the poor. ...read more.

Near the end of 'How The Poor Die', Orwell refers to the poor having 'their teeth extracted with no anaesthetic'. This would strike a chord with many readers as a huge number of people will have had a tooth extracted at some point in their lives and would be able to sympathise directly with the victims. In 'Gulliver's Travels' the revolting sections seem more light-hearted in a way, than the other two pieces. I find Gulliver earnestly describing unpleasant processes a little sickening, slightly funny, but not very disturbing. I think that the disgusting sections in 'Gulliver's Travels' are less important than those in 'A Modest Proposal' and 'How The Poor Die'. I find it difficult to choose whose approach is more effective as the two writers are quite different. They both had social consciences: Swift was a dean and Orwell an early socialist, however I get the impression that Swift is angrier about poverty and it shows in the unbelievable nature of his writing. Orwell doesn't seem as passionate as Swift, as he doesn't use such emotive language and writes in a blunt, flat way. In conclusion, I find Swift more effective. This is probably due to the outrageous, offensive nature of what he has written in 'A Modest Proposal'. I think that by writing in this entertaining way and amusing the reader he is more effective than Orwell. 1349 words Aime� Allam 11B.2 English Coursework page 3 ...read more.