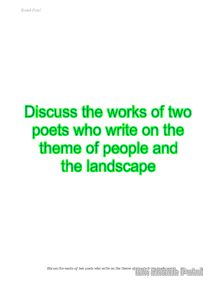 Discuss the works of two poets who write on the theme of people & the landscape The two poets I will be comparing are William Wordsworth and R.S. Thomas. Both of these poets wrote in the theme of scenic areas, people and landscape but had very different views. William Wandsworth was a romanticist meaning that he saw beauty in everything. R.S. Thomas was a realist meaning that he wrote more realistically including both positive and negative points in his work. I will first compare "On Westminster Bridge" by Wordsworth and "A day in autumn" by R.S Thomas. William Wordsworth's poem "On Westminster Bridge" is a detailed description of the view of London in the Morning from Westminster Bridge. The theme of the poem is therefore landscape and scenic areas. R.S. Thomas's poem is also a description; it describes the scenery of a day in autumn probably set in a woodland also based on the theme of landscape. Comparing the poems with one another I first picked up that they are equally written from first person perspectives which help to express that these are the writer's real thoughts and feelings. ...read more.

He does also change the mood from a negative one to a positive one at one point. The period that the poem was written in would affect the writer's style and mood. William Wordsworth was born a long time ago (in 1770) so he would be describing London from a long time ago, before it was industrialised, polluted and when people had a more positive view on it. R.S Thomas was born quite recently and died into the 20th centaury. At this time there is a lot more negativity in the world with wars and political issues. This may have been why R.S Thomas chose to become a realist. The structure of William Wordsworth's poem is similar to the one of R.S Thomas. They are both physically set out in one large paragraph, and are both sonnets. Westminster Bridge has not been split into different arguments or parts. A day in autumn appears to be set out in the same physical way, furthermore with no differing parts. In Westminster Bridge the poem is personal, you can tell this because it has bee written in the 1st person and is as if the poet is actually there, describing the scene to you. ...read more.

Solitary Reaper is a descriptive poem as the author just describes the work this woman is doing and her singing. The same goes for Tramp, R.S Thomas is just describing the tramps life style compared to him. The language in solitary Reaper is not highly figurative as there is no irony, unexpected twists or similes and metaphors. The Tramp poem also is not highly figurative as again it does not contain any of the requirements it become so. The style in both poems is complex as many figures of speech are included in the works. The period would severely affect R.S Thomas's work as he wrote about how the world was getting better with new modern technology. If the poem was written in the past he probably wouldn't write about this subject as it wouldn't make sense. Also in the past there was a lot less negativity in the attitude towards civilisation compared to now. William Wordsworth wrote his poem pre 19th centaury so he would have completely different opinions of things compared to people now-a-days. The solitary reaper is split into 4 paragraphs or verses each verse with 8 lines. Tramp is a much shorter poem and is split into 3 sections, each with 5 lines. Solitary reaper is in the 1st person perspective meaning that the poem is actually experiencing what is happening in the poem. ...read more.