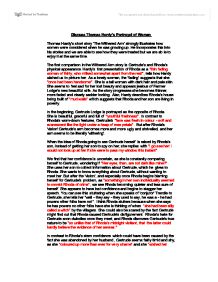 Discuss Thomas Hardy's Portrayal of Women Thomas Hardy's short story 'The Withered Arm' strongly illustrates how women were considered when he was growing up. He incorporates this into his stories and we are able to see how they were treated but we are able to enjoy it at the same time. The first comparison in the Withered Arm story is Gertrude's and Rhoda's physical appearance. Hardy's first presentation of Rhoda as a "thin fading woman of thirty, who milked somewhat apart from the rest", tells how Hardy wished us to picture her. As a lonely woman, the 'fading' suggests that she "once had been handsome". She is a tall woman with dark hair and pale skin. She seems to feel sad for her lost beauty and appears jealous of Farmer Lodge's new beautiful wife. As the story progresses she becomes thinner, more faded and clearly sadder looking. Also, Hardy describes Rhoda's house being built of "mud walls" which suggests that Rhoda and her son are living in poverty. In the beginning, Gertrude Lodge is portrayed as the opposite of Rhoda. ...read more.

In contrast to Rhoda's stern confidence which could have been caused by the fact she was abandoned by her husband, Gertrude seems fairly timid and shy, as she "coloured up more than ever for very shame" and she "wished her noisy gownd anywhere but on her" whilst in church. This would suggest that she is not accustomed to the life of a "yeoman's wife". We find that her confidence is easily put down by her husband, and when he starts ignoring her as a result of her growing scar. When Farmer Lodge states that "it is as if some witch, or the devil himself, had taken hold of me there, and blasted the flesh", referring to Gertrude, and starts growing cold towards her; she begins "craving for renewed love". As a result "The once blithe-hearted and enlightened Gertrude", a kind hearted, generous woman, who enjoyed helping people less fortunate than herself, even "giving away things to other folks in the meads", was steadily "changing into an irritable, superstitious woman, whose whole time was given to experimenting upon her ailment with every quack remedy she came across". ...read more.

He also uses descriptive verbs to create his desired effect which is to portray his women as under men to get his point across. Rhoda is often described as something horrid, as they are constantly being referred to as 'creeping', rather than simply walking. Thomas Hardy encourages his readers to understand the women in his stories, and he does not try to play on the sympathy of the reader. He does not want you to feel sorry for the female characters, or view them as helpless women in need of the protection of men. In my opinion, Hardy had a sensitive understanding of the feelings and behaviour of women, which is helpful so he can empathise with the characters and use this in his stories. I think Hardy wants us to be at the way in which the women are treated by the men. The are treated badly by the men, for example when Farmer Lodge grows further away from his wife because of a disease which is not her fault. I think this shows that the men weren't looking for personality in women but looks in order to raise their social status. ?? ?? ?? ?? ...read more.