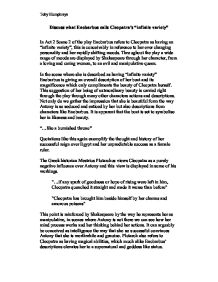 Discuss what Enobarbus calls Cleopatra's "infinite variety" In Act 2 Scene 2 of the play Enobarbus refers to Cleopatra as having an "infinite variety", this is conceivably in reference to her ever changing personality and her rapidly shifting moods. Throughout the play a wide range of moods are displayed by Shakespeare through her character, from a loving and caring woman, to an evil and manipulative queen. In the scene where she is described as having "infinite variety" Enobarbus is giving an overall description of her boat and its magnificence which only compliments the beauty of Cleopatra herself. This suggestion of her being of extraordinary beauty is carried right through the play through many other characters actions and descriptions. Not only do we gather the impression that she is beautiful form the way Antony is so seduced and enticed by her but also descriptions from characters like Enobarbus. It is apparent that the boat is set to symbolise her in likeness and beauty. "...like a burnished throne" Quotations like this again exemplify the thought and history of her successful reign over Egypt and her unpredictable success as a female ruler. ...read more.

When she is with him she behaves like a dominant and controlling woman, in the relationship between the two protagonists she is clearly the one in charge. By doing this she is able to manipulate Antony into getting her own way and keep complete control over him. This idea is also closely linked with the theme and idea of her intelligence and general superiority over all others, hence why she is queen of Egypt. We see a drastic change in her behaviour when she eventually loses this power and Antony returns to Rome due to the death of his wife Fulvia. Here she is seen to be an insecure and dependent woman who longs for the return of Antony and struggles to live without him. Without him by her side she becomes an erratic and unpredictable character which is clearly displayed to the audience in Act 2 Scene 5 when a messenger brings her news of Antony. Impatience and frustration is an obvious focus of the scene as she doesn't allow the messenger to speak before she is threatening to kill him if he tells her anything that she does not want to hear. ...read more.

The variations in Cleopatra's character are further highlighted through the contrasting character of Octavia who becomes Antony's wife over Cleopatra. She is seen to be very undemanding and have little say in the relationship. In the case of her marriage with Antony she is purely used as a political device and to gain more power and bring the triumvirate together; very much in opposition to Cleopatra who is the driving force of the relationship and commands all actions. Octavia can be seen as the model wife of that era as she does what she is told and obeys her husband. This is why I believe Cleopatra appeals to the modern audience much more as she shows, at times, strength for woman kind. Overall I believe that despite the clash between Shakespeare's opinions and other historical ones she is still a very demanding and entertaining character to read/watch. Shakespeare delivers her role in an effective and conflicting manner which displays the characteristics of some women in a engaging way; the use of a variety of techniques aids this also. ?? ?? ?? ?? Toby Humphreys ...read more.