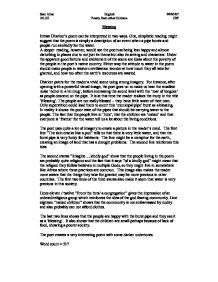 Blessing Imtiaz Dharker's poem can be interpreted in two ways. One, simplistic reading might suggest that the poem is simply a description of an event when a pipe bursts and people run excitedly for the water. A deeper reading, however, would see the poem as being less happy and almost disturbing in places due to not just its theme but also its setting and characters. Under the apparent good fortune and excitement of the scene are ideas about the poverty of the people in the poet's native country. Either way the attitude to water in the poem should make people in western civilisation wonder at how much they all take for granted, and how too often the earth's resources are wasted. ...read more.

The people are not really blessed - they have little water of their own. Only superstition could lead them to count this 'municipal pipe' burst as a blessing. In reality it shows the poor state of the pipes that should be carrying water to the people. The fact that the people live in 'huts', that the children are 'naked' and that everyone is 'frantic' for the water tell us a lot about the living conditions. The poet uses quite a lot of imagery to create a picture in the reader's mind. The first line "The skin cracks like a pod" tells us that there is very little water, and that the burst pipe is very lucky for habitants. ...read more.

The first two lines of the third stanza also make it seem that water is very precious in this society. Lines eleven / twelve "From the huts/ a congregation" gives the impression of an ordered/religious group which reinforces the idea of the god fearing community. Line eighteen "naked children" shows that the community is not embarrassed by nudity and also probably can not afford clothes. The last two lines shows that the people are happy with the burst pipe and they see it as a 'blessing'. It also shows that the children are small perhaps because of lack of food, showing a poorer society. The poet creates a very interesting poem with some darker undertones. Word count = 517 Sam Allen English 09/05/07 10LJG Poetry from other Cultures JBT ...read more.