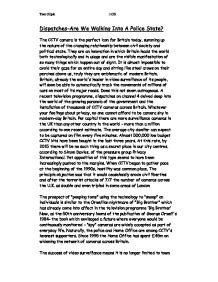 Dispatches-Are We Walking Into A Police State?

Dispatches-Are We Walking Into A Police State? The CCTV camera is the perfect icon for Britain today, summing up the nature of the changing relationship between civil society and political state. They are an innovation in which Britain leads the world both technologically and in usage and are the visible manifestation of so many things which happen out of sight. It is almost impossible to avoid their gaze for an entire day and sitting like steel crows on their perches above us, truly they are emblematic of modern Britain. Britain, already the world's leader in video surveillance of its people, will soon be able to automatically track the movements of millions of cars on most of its major roads. ...read more.

Yet opposition of this type seems to have been increasingly pushed to the margins. When CCTV began to gather pace at the beginning of the 1990s, hostility was common place. The principle objection was that it would ceaselessly erode civil liberties and after the terrorist attacks of 7/7 the number of cameras across the U.K. as double and even tripled in some areas of London The prospect of "peeping toms" using the technology to "snoop" on individuals is similar to the Orwellian nightmare of "Big Brother" which has already come into affect in the television programme 'Big Brother' Now, as the 50th anniversary looms of the publication of George Orwell's 1984- the book which envisaged a future where everyone would be continuously monitored - "spy" cameras are widely accepted as part of everyday life. ...read more.

But next time you are walking down the street, you don't even have to go as far as imagining people running around after you with cameras and boom mikes. what if; for instance, every camera had a 21-inch monitor accompanying it; so those being watched could see what the controllers were seeing? We don't live in a totalitarian society. The cameras have a benign purpose. We hold our privacy cheap, it seems, if it will help catch criminals and reduce muggings and vandalism. But as technology advances, fear of terrorism increases and civil liberties retreat - witness the proposals for trials without jury, house arrest and ID cards - the idea of a total-surveillance society is increasingly attractive to politicians, corporations, law-enforcement agencies and citizens alike. Privacy - or if you prefer a less loaded term, anonymity - is slowly dying out. ?? ?? ?? ?? Tom Gilpin 11GS ...read more.