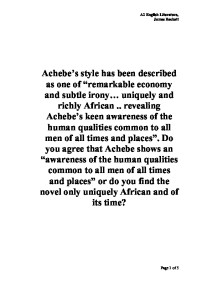 Do you agree that Achebe shows an &quot;awareness of the human qualities common to all men of all times and places&quot; or do you find the novel only uniquely African and of its time?

Achebe's style has been described as one of "remarkable economy and subtle irony... uniquely and richly African .. revealing Achebe's keen awareness of the human qualities common to all men of all times and places". Do you agree that Achebe shows an "awareness of the human qualities common to all men of all times and places" or do you find the novel only uniquely African and of its time? "Things Fall Apart" by Chinua Achebe is a twentieth-century African tragedy written about the destruction of the African Igbo tribe by 'white men' from the west. The novel focuses on Africa's gradual invasion by white Westerners and the effects of colonisation on specific individuals and groups within the society. The novel has many distinct African features that define the pre-colonial culture of the Igbo tribe. The very beginning of the novel describes an African festival, in which drums and flutes are being used whilst the spectators look on in awe, "The drums beat and the flutes sang and the spectators held their breath." Achebe's use of sensory language, such as the sounds of the instruments, gives the audience a greater sense of shared experience of what it was like to be part of the Igbo tribe. ...read more.

"You have a manly and a proud heart. A proud heart can survive general failure because such a failure does not prick its pride. It is more difficult and more bitter when a man fails alone." The character of Okonkwo serves to show how the relationship between father and son can differ between generations. Okonkwo's relationship with his father is not shown throughout the novel, but his father is the main motivation for Okonkwo's disdain of laziness and weakness. Achebe is emphasising the importance of a healthy role-model, which the character of Okonkwo clearly doesn't have, but the downfall of Okonkwo at the end of the book implies that Okonkwo should have been more respectful of his father and his heritage. Achebe has created a very deterministic character, who believes that the only way of being successful is to be hard-working, strong and determined. However, the Ibo tribe did not frown upon Okonkwo for his father's sins. This lead critic Umelo Ojinmah to argue, "This flexibility of the society contrasts markedly with Okonkwo's single-mindedness". Although the Ibo tribe do not seem to mind about Unoka's lazy and weak past, Okonkwo is still driven to ensure he does not end up like his father. ...read more.

However, the circumstances in which these qualities are drawn out of the character by Achebe seem to appeal more to African readers. In the past, Achebe has pointed out that it is his duty as an African novelist to inform the wider audience about his culture and the way it has progressed over time. An internet critic has agreed, arguing "Achebe is not only trying to inform the outside world of Ibo cultural traditions, but to remind his own people of their past and to assert that it had contained much of value." This critic appears to be implying that this novel is both 'uniquely African' and 'relevant to men of all places and times'. In conclusion, Achebe's portrayal of both men and women are 'uniquely African', but the general themes and narrative can be related to men of all times and places. 'Men' need not be interpreted literally, as the universal themes apply to both genders. It appears that Achebe's intention was to provide a novel that could inform both descendents of the Ibo tribe and descendents of the colonisers of the events taking place during colonisation in Nigeria. The result is a novel that informs and educates readers of these events. ?? ?? ?? ?? A2 English Literature, James Beckett Page 1 of 5 ...read more.