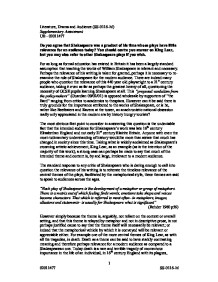 Do you agree that Shakespeare was a product of his time whose plays have little relevance for an audience today? You should centre you answer on King Lear, but you may also refer to other Shakespeare plays if you wish.

Literature, Drama and Audience (SS-0116-M) Supplementary Assessment UB - 02011477 Do you agree that Shakespeare was a product of his time whose plays have little relevance for an audience today? You should centre you answer on King Lear, but you may also refer to other Shakespeare plays if you wish. For as long as formal education has existed in Britain it has been a largely standard assumption that teaching the works of William Shakespeare is relevant and necessary. Perhaps the relevance of his writing is taken for granted, perhaps it is necessary to re-examine the role of Shakespeare for the modern audience. There are indeed many people who question the relevance of this 440 year old playwright to a 21st century audience, taking it even as far as perhaps the greatest heresy of all, questioning the necessity of GCSE pupils learning Shakespeare at all. This "proposed vandalism from the policymakers" (Guardian 09/02/01) is opposed wholesale by supporters of "the Bard" ranging from critics to academics to thespians. However can it be said there is truly grounds for the importance attributed to the works of Shakespeare, or is he, rather like Beefeaters and Ravens at the tower, an anachronistic national obsession really only appreciated in the modern era by history hungry tourists? The most obvious first point to consider in answering this question is the undeniable fact that the intended audience for Shakespeare's work was late 16th century Elizabethan England and not early 21st century Blairite Britain. Anyone with even the most rudimentary understanding of history would be more than aware that much has changed in society since this time. ...read more.

However can it truly be said that this historical contextualisation- or a perceived lack of it- is such a barrier to the appreciation of the play by a modern audience as to deem the central themes and messages irrelevant? It could perhaps be argued that the appreciation of the historical context is a necessary part of the appreciation of the work in general; certainly it is true that a certain degree of contextualisation is necessary in the teaching of Shakespeare, and perhaps an audience today would miss much of the relevance of the plays without this knowledge. However there are perhaps even broader themes to King Lear, as with all the plays, which require no historical appreciation to understand. These themes, as an ardent Shakespearean would argue, are the themes that are timeless, and are the means by which Shakespeare has, and perhaps always will, stayed relevant. Therefore turning once again to King Lear; the themes of the play must, for the relevance of it to a modern audience to be justified, both appeal to and be understood by that audience. Perhaps it could be argued that historical context is an element of audience appreciation which can, if lacking, be taught or otherwise explained. However if the central themes, the "metaphors, images, allusions and statements", are irrelevant to the audience then the message of the play is lost, and perhaps then it truly does become little more than a historical curiosity. "By all the operation of the orbs From whom we do exist and cease to be; Here I disclaim all my paternal care, Propinquity and property of blood, And as a stranger to my heart and me Hold thee, from this, for ever." ...read more.

"The weight of this sad time we must obey; Speak what we feel, not what we ought to say. The oldest hath borne most: we that are young Shall never see so much, nor live so long." (King Lear, 5, iii, 310-25) The death throw repentance of King Lear's Machiavellian schemer Edgar speaks perhaps directly to this timeless appeal to the better half of human nature. Through Edgar Shakespeare is perhaps saying that if the future is to be a future in which "we that are young" (the modern audience perhaps) "Speak what we feel, not what we ought to say", or are ruled by our vision unclouded by political or financial self interest or our pride in our achievements, that such tragedy may not ever need to be seen again. For the greatest of tragedies are those which could and often should have been avoided. The genocide in Rwanda, ethnic cleansing in Yugoslavia, famine in Africa, the murder of children at home and countless other tragedies, large and small, in all our lives, are perhaps the modern "weight[s] of this sad time", and a parallel could surely by found in any era of human history. Shakespeare then appeals to us to see the weakness of humanity in order that we may see its strength, to see suffering (as Revolinski states) in order to see hope, to see blindness in order to appreciate sight, to see evil in order that we see good. It would perhaps need to be a powerful argument that, historical and grammatical boundaries withstanding, this is not a message that can appeal to any audience, and be relevant to them. ...read more.