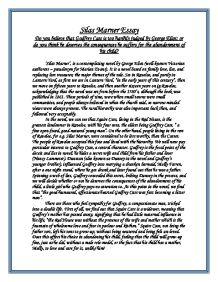 Do you believe that Godfrey Cass is too harshly judged by George Eliot; or do you think he deserves the consequences he suffers for the abandonment of his child?

Silas Marner Essay Do you believe that Godfrey Cass is too harshly judged by George Eliot; or do you think he deserves the consequences he suffers for the abandonment of his child? 'Silas Marner', is a contemplating novel by George Eliot (well-known Victorian authoress - pseudonym for Marian Evans). It is a novel based on family love, lies, and replacing lost treasures; the major themes of the tale. Set in Raveloe, and partly in Lantern Yard, as first we are in Lantern Yard, "in the early years of this century", then we move on fifteen years to Raveloe, and then another sixteen years on in Raveloe, acknowledging that the novel was set from before the 1780's, although the book was published in 1861. These periods of time, were when small towns were small communities, and people always believed in what the church said, so narrow-minded views were always present. The rural hierarchy was also important back then, and followed very acceptably. In the novel, we can see that Squire Cass, living in the Red House, is the greatest landowner in Raveloe, with his four sons, the eldest being Godfrey Cass, " a fine open-faced, good-natured young man". On the other hand, people living in the rest of Raveloe, for e.g. Silas Marner, were considered to be less worthy, than the Casses. The people of Raveloe accepted this fate and lived with the hierarchy. We will now pay particular interest to Godfrey Cass, a central character. ...read more.

to marry Nancy and still keep a secret marriage, can be said to be ridiculous! "He had not moral courage enough to contemplate that active renunciation of Nancy". The next issue we will discuss is that of the way Godfrey treats Molly, his wife. He treats her with no respect or gratitude, leaving her to look after their child alone, with only a little sum of money each week, to buy food. Molly, under an agreement of not telling anyone about their marriage, in return for some money (which she buys opium with, rather than to buy food for the baby) judges Godfrey very harshly, and not just because of abandoning her child, but because she believes that the wife of a Cass, should be privileged, and live in the Red House, "he was well off; and if she had her right she would be well off too", and this would happen if she got any rights. Should Godfrey be judged harshly by this, by the fact that he treats Molly like nothing, let alone his won wife? Another issue that has been raised earlier, but can be discussed in further detail, is the fraudulence of Godfrey. He was deceitful about his marriage to Molly, pretending not to know his own child for sixteen years, and about not telling Nancy that he had a child, even when they married, later on in the novel. When the truth eventually did come out, Godfrey's deception was relieved of, but dealt with, with high suspicion and that Nancy said she would have accepted the 'concealed baby' even if it was not her own. ...read more.

he has done, throughout the novel, Godfrey, as a once good-natured man didn't deserve to be treated ruthlessly, but Godfrey as a disdainful, changed character does. I feel that the vote that influenced me to not feel sorry for Godfrey being too harshly judged is the neglecting of his child, and I feel that he should suffer the consequences for it. Godfrey expects too much of his power as a 'king' in the rural hierarchy, which he thinks he can use, to reclaim his daughter-sixteen years after!!! Abandoning a child and expecting her to follow himself (Godfrey) to the Red House is a foolish act, as Eppie even claimed not to go to the Red House, but stay with Silas, which agitated Godfrey. I feel that here; Eliot was rightly harsh enough on Godfrey, as she made Eppie stay with Silas, and Godfrey embarrassed. "Then, sir...why didn't you say sixteen year ago, and claim her before I'd come to love her," were the words of Silas to Godfrey, which made him think just how much of a mockery he had made of himself, expecting too much, which I believe to be a good judgement of him. Also, the fact that Godfrey lied to his family, and wife, made me believe that he deserves these consequences even greater. Overall, I have to come to a final conclusion that I believe to be true - Godfrey deserved the consequences he suffered for abandoning his child, but at times, has been judged a bit too harshly by Eliot. ...read more.