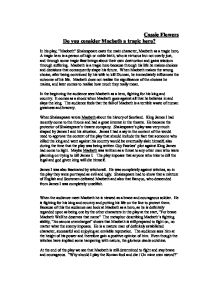 Do you consider Macbeth a tragic hero?

Cassie Flowers Do you consider Macbeth a tragic hero? In his play, "Macbeth" Shakespeare casts the main character, Macbeth as a tragic hero. A tragic hero is a person of high or noble birth, who is virtuous but not overly just, and through some tragic flaw brings about their own destruction and gains wisdom through suffering. Macbeth is a tragic hero because through his life he makes choices and decisions that consequently shape his future. When Macbeth makes the wrong choice, after being convinced by his wife to kill Duncan, he immediately influences the outcome of his life. Macbeth does not realise the significance of the choices he makes, and later comes to realise how much they really mean. In the beginning the audience sees Macbeth as a hero, fighting for his king and country. It comes as a shock when Macbeth goes against all that he believes in and slays the king. The audience feels that the fall of Macbeth is a terrible waste of human greatness and bravery. When Shakespeare wrote Macbeth about the history of Scotland. King James I had recently come to the throne and had a great interest in the theatre. He became the protector of Shakespeare's theatre company. Shakespeare's play was very much shaped by James I and his situation. James I had a say in the content of the would need to approve the context of the play that should include the fact that someone who killed the king and went against his country would be eventually slain himself, also during the time that the play was being written Guy Fawkes' plot against King James had come to light. ...read more.

The antithesis is part of the appearance Vs reality, "False face must hide what the false heart does know" assures Macbeth. I think that the witch's prophecies triggered off Macbeth's desire to be king. Lady Macbeth made these desires stronger by criticising him and then Macbeth decided himself what he thought was the right thing for him to do. As he had received more criticism and was being told that he should murder, that he should be King Macbeth decided to kill Duncan. I feel that if Macbeth hadn't been driven to murder by Lady Macbeth the king then he wouldn't have done it, as he couldn't have done it himself. And because of this I think that Macbeth's downfall is as much Lady Macbeth's fault as it is his own. Macbeth knows what's morally right, however, his own greed and ambition overrule his conscience and he decides to act on his decision. After killing Duncan Macbeth is filled with panic and regret. His conscience tears away at him. Macbeth is filled with many emotions, but the main emotion is fear. Macbeth fears many things in the play because of this. Macbeth is afraid of thoughts, what others think, his actions, the consequences of these actions, the future, Banquo, Fleance, death and most importantly fate. Macbeth is even afraid of fear itself. Macbeth is afraid that he will no longer be able to pronounce "Amen" and afraid that he will not be able to sleep. ...read more.

Conclusion I think that the downfall of Macbeth has greatly mattered to the audience. Macbeth wanted to become king so as he could achieve something in his life and be remembered as "Brave King Macbeth" instead of just "Brave Macbeth" to make people proud of him. He tried his hardest to win high titles, but goes about it in all of the wrong ways. After the first murder Macbeth has no choice but to carry on murdering as he cannot stop himself. Macbeth was afraid of fear itself. This scared him, but not enough to stop him, which just shows how determined Macbeth was to become king. I think that Macbeth's final downfall is caused by the fact that his guilty conscience rules his life. I do feel sorry for Macbeth, as even though what he did was evil, his reason was that he wanted fulfilment in life. The only way he thought he could achieve this was to kill Duncan. Macbeth thought that after he had killed Duncan he would be king without any problems, fear caught up with him and he became obsessed with keeping the crown and saw everybody as a threat, even thought they weren't. He became trapped and fearful. After he had committed one murder he had to commit more, which became out of control. Macbeth was a tragic hero. In the end he eventually fell to pieces, but remained fighting for his beliefs, although these beliefs changed from believing that Scotland should stand proud, to believing that he was an invincible king, Macbeth maintained the bravery and strength that he displayed in the beginning, which was the main strength in his character. ?? ?? ?? ?? ...read more.