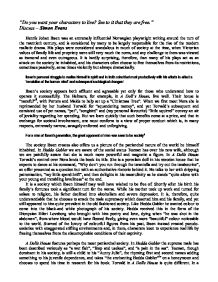 &quot;Do you want your characters to live? See to it that they are free.&quot; Discuss

"Do you want your characters to live? See to it that they are free." Discuss - Simon Evans Henrik Johan Ibsen was an extremely influential Norwegian playwright writing around the turn of the twentieth century, and is considered by many to be largely responsible for the rise of the modern realistic drama. His plays were considered scandalous in much of society at the time, when Victorian values of family life and propriety were still very much the norm, and any challenge to them was viewed as immoral and even outrageous. It is hardly surprising, therefore, than many of his plays act as an attack on the society he inhabited, and his characters often choose to free themselves from its restrictions, sometimes passively, some times violently but always dramatically. Ibsen's personal struggle to realise himself in spirit and in truth coincided most productively with his efforts to effect a 'revolution of the human mind' and subsequent sociological changes.i Ibsen's society appears both affluent and agreeable yet only for those who understand how to operate it successfully. The Helmers, for example, in A Doll's House, live well. Their house is "tasteful"ii, with Porters and Maids to help set up a "Christmas Tree". When we first meet Nora she is reprimanded by her husband Torvald for "squandering money", and yet Torvald's subsequent and consisted use of pet names, "pet", "songbird" and (my personal favourite) "little squirrel" convey an air of joviality regarding her spending. But we learn quickly that such benefits come at a price, and that in exchange for societal involvement, one must conform to a view of proper conduct which is, in many respects, extremely narrow, savagely enforced and unforgiving. For a man of Ibsen's generation, the great opponent of man was seen to be societyiii The society Ibsen creates also offers us a picture of the patriarchal nature of the world he himself inhabited. ...read more.

There may even be a sense that Torvald knows this and that part of their relationship requires him to set the rules and Nora to flout them. One production beautifully displayed this quality by Torvald's brushing sugar from Nora's lips and collar as she denies eating macaroons. There is also no evidence of Nora ever feeling patronised by Torvald's names, indeed she uses them herself to retain control over him. The answer might be that both are role playing, and over the years have developed a highly attractive and, initially, warm bandiage based on this sense of identity adoption. One crucial factor in the roles Nora plays is that she needs to be in control, to take the lead role, as it were, using other people either as supporting actors or audience and that she writes her own script.viii So having displayed for us the Christmas time banter between the two of them: HELMER Good heavens, I know only too well how Christmas runs away with the housekeeping. NORA Ten, Twenty, Thirty, Forty. Oh thank you, thank you Torvald! This will see me quite a long way. HELMER Yes it'll have to. NORA Yes, yes, I'll see that it does. Why does Ibsen then drive his leading character to despair, contemplative suicide and eventual desertion of the man she loves, her children and her home. What does she need to be free from? Someone said of Chekhov's writing, specifically The Cherry Orchard that the characters are divided into those who are "victims of illusion" and those who are "victims of disillusionment"ix. Ranyevskaya, for example, occupies the former category, as Anya say "We scarcely managed it here, and Mama doesn't understand! We'll sit down to dinner... and she orders the most expensive thing on the menu". Firs, in his closing soliloquy, painfully inhabits the latter, "My life's gone by, and it's just as if I'd never lived at all". ...read more.

In Chekhov, however, one cannot be totally sure that a character will be different other than a change in hair colour of shoulder width, the social message we, as audience members, receive is unchanged, and somehow the character has less life because of it. Ibsen's Nora, on the other hand has been described as "underdetermined"xv, and the plethora of essays and papers discussing the last few pages of A Dolls House pays tribute to its lack of "determined" message. At the heart of great characters is a mystery, an ambiguity, something that finally eludes rational interpretation.xvi We do what we can to make reasonable sense of her motives, but we can never be entirely successful and remain true to the character as presented to us because of her freedom as a character, which offers her a new life every time a new actress adopts her. As one critic put it, in relation to Shakespeare, the greatest dramatic characters have the "freedom of incongruity"xvii, and hence the power to evade the neat compartments we want to place them in. Nora is not simply a icon for female emancipation and suffragette movements, nor is she a malicious abandoner. To pigeon-hole her like that is to over-determines Nora, seeing in her a character whose actions are fully and entirely comprehensible in the light of a modern ideology, making her, in effect, typical rather than extraordinary, which is far from the truth. She is, in meta-theatrical and literary senses a truly free character, and in frantic dances, fervent sobbing, and final resounding door slam, more alive than most figures on stage. i Ibsen, A Collection of Critical Essays: Ed. Rold Fjelde (Specturm 1965) ii All Ibsen quotes taken from Four Major Plays: Henrik Ibsen (Oxford 1994) iii A Pocket Guide to Ibsen, Chekhov & Strindberg: Michael Pennington (Faber and Faber Ltd 2004) iv All Chekhov quotes taken from Plays: Chekhov (Methuen 1991) v Contemporary Approaches to Ibsen: Vol 6: Ed. Bjorn Hemmer (SUP 1989) vi Contemporary Approaches to Ibsen: Vol 8: Ed. Bjorn Hemmer (Aschehoug 1994) vii Ibsen, A Collection of Critical Essays: Ed. ...read more.