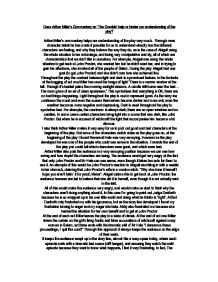 Does Arthur Miller's Commentary on 'The Crucible' help or hinder our understanding of the play?

Does Arthur Miller's Commentary on 'The Crucible' help or hinder our understanding of the play? Arthur Miller's commentary helps our understanding of the play very much. Through more character detail he has made it possible for us to understand exactly how the different characters are feeling, and why they behave the way they do, as in the case of Abigail using the whole situation to her advantage, and being very manipulative and sly, all of which are characteristics that we don't like in ourselves. For example, Abigail was using the whole situation to get back at John Proctor, she wanted him but he didn't want her, and in trying to gain his affections, she involved all of the people of Salem. During the play Abigail had one goal (to get John Proctor) and she didn't care how she achieved this. Throughout the play the contrast between light and dark is a prominent feature. In the footnote at the begging of act one Miller has used the image of light "There is a narrow window at the left. Through it's leaded pains the morning sunlight streams. A candle still burns near the bed... The room gives of an air of clean spareness." ...read more.

In this case I'm going to point out Judge Danforth because he is so wrapped up in his own little world and doing what he thinks is "right". At first Danforth only frustrated me with his ignorance, but as the story line developed I found my frustration turning to anger and my anger into hate. Abby also frustrated me because she twisted the situation for her own benefit and to get at John Proctor At the end of each act Miller leaves the play in a state of climax. At the end of act one Miller draws the curtain on the girl's firing frantic and false accusations of witchcraft against many women in Salem, act three ends with the dramatic exit of Mr Hale "I denounce these proceedings, I quit this court!" Through this approach it always keeps the audience on the edge of their seats. It keeps the audience swept up in the story line, almost like a soap opera today, where each episode ends with a dramatic last scene (cliff hanger), and ensuring they watch the next episode because they want to know what happens, I find it very frustrating. In fact, The Crucible is very similar to a modern day soap opera, in that its success as a whole depends on how involved the viewers, or audience, become with the characters and the story line. ...read more.

It's also interesting to see how different relationships develop as the plot unfolds. For example, the relationship between John and Elizabeth Proctor goes through almost unrecognisable changes. At the beginning of the play we see their relationship very dull. However at the end of act four we hear the warm and passionate swap between the two characters as Elizabeth opens her heart to John and although not wishing for him to bear witness to Witchcraft desperately wanting him to live so he could bring up there unborn baby together. We can see and feel sorry for how the pressure they are being put under is affecting each of the relationships. This allows us to become even more involved in the plot. But in the end, who is to blame for all of the executions? Puritanism, Abby or Danforth? The play is deliberately complex and versatile, and not in plain and simple text, even though the characters themselves are simple. In my opinion everyone's to blame, if one person would have seen sense or admitted it was a hoax it would have never happened. If Abigail hadn't twisted the story it wouldn't have happened. If Judge Danforth hadn't of been so determined he would have seen through straight through Abigail's routine. But at the end as in our own lives, there is no one completely to blame for anything. Very rarely is anything one person's fault. By Adam Edwards ...read more.