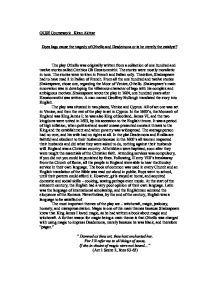 Does Iago cause the tragedy of Othello and Desdemona or is he merely the catalyst?

GCSE Coursework Kiran Akhtar Does Iago cause the tragedy of Othello and Desdemona or is he merely the catalyst? The play Othello was originally written from a collection of one hundred and twelve stories called Cinthios Gli Hecatommithi. The stories were mostly moralistic in tone. The stories were written in French and Italian only. Therefore, Shakespeare had to have read it in Italian of French. From all the one hundred and twelve stories Shakespeare, chose one, regarding the Moor of Venice, Othello. Shakespeare's main innovation was in developing the villainous character of Iago with his complex and ambiguous motives. Shakespeare wrote the play in 1604, one hundred years after Hecatommithi was written. A man named Geoffrey Bullough translated the story into English. The play was situated in two places, Venice and Cyprus. All of act one was set in Venice, and then the rest of the play is set in Cyprus. In the 1600's, the Monarch of England was King James I; he was also King of Scotland, James VI, and the two kingdoms were united in 1603, by his accession to the English throne. It was a period of high inflation, when political and social unease presented constant threats to the King and the establishment and when poverty was widespread. The average person had no vote, and his wife had no rights at all. In the plat Desdemona and Emilia are faithful and obedient to their husbands because in the 1600's all women respected their husbands and did what they were asked to do, nothing against their husbands will. England was a Christian country. All children were baptized, soon after they were taught the essentials of the Christian faith. Attending services was compulsory, if you did not you could be punished by fines. Following, Henry VIII's breakaway from the Church of Rome, all the people in England were able to hear the Sunday service in their own language. ...read more.

Iago's view of his own marriage is terrible. He thinks women are wild cats in their kitchens, pictures out of doors and housewives in their beds; he is a stereotypical man. "... you are pictures out of doors, bells in your parlours, wild-cats in your kitchen," (Act 2 Scene 1, lines 108-110) Iago is accusing women of being, silent outside, noisy in their beauty parlours and animals in the kitchens. He also accuses his wife of being a w***e. "You rise to play and go to bed to work." (Act 2 Scene 3, line 113) After all these accusations about women, I do not think that his marriage and view of marriage is very successful. Nevertheless, I do not think that iago is jealous of Othello's marriage. I think this because nowhere in the play he mentions being jealous of Othello' and Desdemona's marriage. However, he is trying to break their relationship for Roderigo's money. " It cannot be that Desdemona should Long continue her love to the moor - put thy money in thy Purse - nor he is to her." (Act 1 Scene 3, lines 332-333) Iago is completely obsessed with s*x images; he produces horrible s*x images in a person's mind. "... you'll have your daughter covered with a Barbary horse," (Act 1 Scene 1, lines 111-112) Iago is telling Brabantio that his daughter is having s*x with a Barbary horse. He also puts horrible images into Othello's mind of Desdemona and Cassio committing adultery. " And then, sir, he would gripe and wring my hand Cry, 'o sweet creature!" and then kiss me hard." (Act 3 Scene 3, lines 422-423) Iago is not obsessed with having s*x, but he is obsessed with the images and taunting others with the pictures. We do not know Iago's motivations because he is changing characters in every scene. At the beginning, his motivation was that he did not receive the job that he had intended and sought to get his own back by getting Cassio dismissed from the job. ...read more.

"...that she shunned The wealthy curled darlings of our nation." (Act 1 Scene 2, lines 67-68) Brabantio is saying in this scene, that Desdemona received so many offers in marriage from handsome, rich Englishmen. Why would she reject all those and choose Othello. Desdemona marries Othello because of his adventure stories and imagination. " Upon this hint I spake: She loved me for the dangers I had passed," (Act 1 Scene 3, lines 165-166) Othello's mistreatment of Desdemona shakes her confidence in herself, but does not destroy it. There is one minor character in the play that influences the tragedy, Emilia. Emilia is one of the characters because she gives Desdemona's handkerchief to Iago with out asking the reason, why? "I am glad I have found this napkin: This was her first remembrance from the Moor. My wayward husband hath a hundred times Wooed me to steal it:" (Act 3 Scene 3, lines 293-295) I do not think that Othello loves Desdemona truly because at the beginning of the play he says that he fell in love with Desdemona because of her pity for his injuries. "And I loved her that she did pity them." (Act 1 Scene 3, line 167) I do not think that Iago was solely to blame for the tragedy. He was the one that set out traps for Othello to fall in, but during Act, it was predictable that Desdemona was going to die. I can say this because every word that Iago said Othello would deny it but then he would go back to Desdemona and question her. In addition, as iago had worked out everything beforehand it would all connect and Othello would believe it. If it were not for his weaknesses I do not think the tragedy at the end would have happened. Because if he was straight with Desdemona from the start and confronted her with his feelings and what he had heard from Iago, then everything would have been clear and would have been sorted, but because of his lack of trust and jealousy it resulted in Desdemona's death. ?? ?? ?? ?? ...read more.