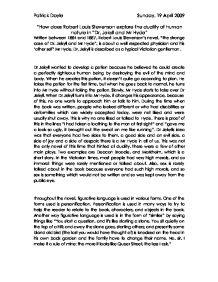 does Robert Louis Stevenson explore the duality of human nature in Dr. Jekyll and Mr Hyde

Written between 1884 and 1887, Robert Louis Stevenson's novel, "the strange case of Dr. Jekyll and Mr Hyde", is about a well respected physician and his 'other self' Mr Hyde. Dr. Jekyll is described as a typical Victorian gentleman . [PD1] Dr Jekyll wanted to develop a potion because he believed he could create a perfectly righteous human being by destroying the evil of the mind and body. When he creates this potion, it doesn't quite go according to plan. He takes the potion for the first time, but when he goes back to normal, he turns into Mr Hyde without taking the potion. Slowly, Mr Hyde starts to take over Dr Jekyll. When Dr Jekyll turns into Mr Hyde, it changes his appearance, because of this, no one wants to approach him or talk to him. ...read more.

Dr Jekylls idea was that everyone had two sides to them, a good side and an evil side, a side of joy and a side of despair; there is a Mr Hyde in all of us. This was not the only novel of this time that hinted at duality, there were a few of other main plays. Two examples are Deacon Broodie, and Markheim, which is a short story. In the Victorian times, most people had very high morals, and so immoral things were rarely mentioned or talked about. Also, sex is rarely talked about in the book because everyone had such high morals, and so sex is something which would not be written and so was kept away from the public eye. ...read more.

is knocked on the head in his own back garden and the family have to change their name. No, sir, I make it a rule of mine: the more it looks like Queer Street, the less I ask."[PD3] The novel was written when the world was not very advanced medically. In the world today, we know of illnesses such as schizophrenia. It is thought that the novel was written about someone who had schizophrenia which would be treated with medication nowadays. jekyll and hyde were indeed the same person and Dr Jekyll didn't really have "an evil side" to him, it was just because he had a split personality disorder. [PD1]Paragraph one first draft [PD2]Paragraph two first draft [PD3]Paragraph 4 First Draft ?? ?? ?? ?? Patrick Doyle Sunday, 19 April 2009 "How does Robert Louis Stevenson explore the duality of human nature in "Dr. Jekyll and Mr Hyde" ...read more.

This essay response is directed at a question that asks it's candidate to consider how Robert Louis Stevenson present the duality of man in 'The Strange Case of Dr. Jekyll and Mr. Hyde'. There is a basic level of analysis ...

This essay response is directed at a question that asks it's candidate to consider how Robert Louis Stevenson present the duality of man in 'The Strange Case of Dr. Jekyll and Mr. Hyde'. There is a basic level of analysis retained throughout the entire essay and a number of methods by which Stevenson explores man's duality have been addressed. There could be a better link made between the analysis and the question though, as a lot fo the comments are very general and are not tied to how they present the duality of man. Commenting on personification is perhaps not required in an essay like this, as the candidates are not asked for an analysis of exclusively language - this is a more thematic question and thus requires a thematic approach.

The Level of Analysis shown here is indicative of a low C grade answer. There is a good understanding of the novel and it's themes shown, as well as it's role in presenting the duality of man, but often it feel like very little of the analysis this candidate actually gives relates back to the question proposed. This will lose many marks in the exam as the candidate has not been specific enough. Their comments are very general and could be applied to almost any analytical question for this novel. As a future tip: of candidate are struggling trying to make the link between their analytical points and the question then they should just re-word/re-phrase/re-use the words of the question in the Explanation section of their PEE (Point, Evidence & Explanation) formula. This way all points are tied back to the question and this encourages an even stronger focus.
It would also be a good practice if the candidate didn't make half-complete remarks with no evidence or relevance to the question (the comment about sex in Nineteenth Century literature is bizarrely irrelevant and doesn't even relate to the novel, let alone the question).

The Quality of Written Communication is very basic, and therefore there are no moments where the candidate makes many mistakes, because of the very simplistic register with which they write their answer. It would be a good practice in the future to become more familiar with constructing longer, more interestingly structured sentences and to use a wider range of punctuation to prove to the examiner that the candidate is a confident writer.