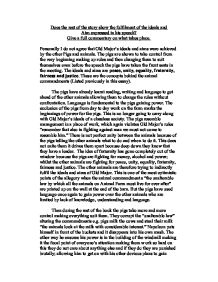 Does the rest of the story show the fulfilment of the ideals and aims expressed in Old Major's Speech?

Does the rest of the story show the fulfilment of the ideals and Aim expressed in his speech? Give a full commentary on what takes place. Personally I do not agree that Old Major's ideals and aims were achieved by the other Pigs and animals. The pigs are shown to take control from the very beginning making up rules and then changing them to suit themselves even before the speech the pigs have taken the front seats in the meeting. The ideals and aims are peace, unity, equality, fraternity, fairness and justice. These are the concepts behind the animal commandments (Listed previously in this essay). The pigs have already learnt reading, writing and language to get ahead of the other animals allowing them to change the rules without confrontation. Language is fundamental to the pigs gaining power. The exclusion of the pigs from day to day work on the farm marks the beginnings of power for the pigs. This is no longer going to carry along with Old Major's ideals of a classless society. ...read more.

They work as hard as they can believing that they will only work a three-day workday and each stall will have hot and cold-water, electricity and a light. This is their ideology a vision of their "promised land". When the windmill is ruined Napoleon decides that it is to be rebuilt again this time with walls thicker so that no man could knock it down. The same thing goes on again only this time they can use the debris from where the rocks smashed. During all this the seven commandments are being changed and because the other animals are too scared and too stupid; they notice that something has changed but they just go along with it being okay because it is all under Napoleon's rule. If the animals start protesting Napoleon uses Snowball as a scapegoat shifting all the bad onto him. According to Napoleon Snowball is the route of all evil. He also uses Mr Jones as another scapegoat he says, "do you want Jones and his men back". ...read more.

Sold for meat, sold for money, sold for alcohol. The commandment is changed from no animal is allowed to drink alcohol; to no animal is to drink alcohol in excess. Muriel the goat then notices that "there was yet another of them which the animals remembered wrong." The pigs are now seriously involved with the other farms and humans around in the area. Acting like them, walking on two legs, drinking alcohol in excess and even playing cards. In the last chapter of the book the animals can hear noise from the farmhouse so they go too see what is going on. As they look on through the window they see men and pigs sat around the table. By this point they are finding it very difficult if not impossible to tell the difference between pig and man. It ends with Orwell drawing attention to the cheating at cards, "Napoleon and Pilkington had each played an ace of spades simultaneously". Orwell is making the point that each is corrupt as the other. Therefore Orwell has made it clear that if you set out to do something you can. Even using someone else's ideology to get your own way. ...read more.

This is a question orientating around the ideology of the fictional political viewpoint of Animalism and how successful the animals of 'Animal Farm' are at achieving this policy. Old Major presented the ideology and when he died the younger animal ...

This is a question orientating around the ideology of the fictional political viewpoint of Animalism and how successful the animals of 'Animal Farm' are at achieving this policy. Old Major presented the ideology and when he died the younger animal set about trying to bring about a revolution by which the laws of Animalism were soon brought into action. This answer comments quite broadly on the use of Animalism and it's effectivity in achieving what the Old Major wanted. However, there are some parts of the essay where not enough detail provided to elicit marks for impressive insight as the analysis given is very superficial and barely scrapes the surface of proper analysis - it feels very fixed to simply recalling the events fo the novel. This is something that must be avoided at all costs as there are absolutely no marks to be achieved if candidates do this.

Where the candidate has achieved a higher recognition in their analytical skills is in realising the context of the novel and what each of the characters and motifs represents as a part of Animalism. To push this further though, the candidate might also comment briefly on how the events and characters of the novel represents the events and important political figures in the Russian Revolution of 1917 (Marx as Old Major; Trotsky as Snowball; Lenin as Squealer; Stalin as Napoleon, etc.). This contextual appreciation would've fortified the answer but does not always directly address the question, so if the candidate is pressed for time or is not attempting to achieve higher than a high B grade then context of this level may not be required in their answer.
I like the commentary on the pigs changing the rules of Animalism and the way they manipulate language in order to re-align their power so they permanently oppress the other animals, as it shows a good understanding of the fundamental qualities of the pigs and their representation as Communist leaders, though again, further detail could be provided at this part, perhaps with the candidate commenting on the abandonment of Snowball in a better light than what is shown here. For instance, how does the abandonment of Snowball show the demise of Old Major's original plans for Animalism? How is this representational or symbolic of what the Communist Russian leaders Stalin and Lenin were doing in 1917? This kind of analysis is where the real marks are - those that separate the A/A* grade student from the C/B students. It shows a deep-set understanding of novel and it's socio-political agenda and examiners love to see this depth of consideration given to the question.
One big irk with this essay is the apparently rushed conclusion. Conclusion absolutely cannot consist of one measly line by itself. Conclusions, by definition, conclude or summarise the previous points made in the main analytical body of text and then draw a final observation (objective, usually) in direct response to the question having considered all the facts explored. The conclusion here is simply not acceptable and appears to introduce a new idea that would be better left unwritten, as it now suggests more was meant to be written but the candidate ran out of time.

The Quality of Written Communication (QWC) here is average. There are no glaring misuses of grammar and the spelling is relatively accurate (there are no moments where a low QWC is consistent enough to compromise the meaning of the answer, but it would be best in the future for candidates to proof-read their answer for such errors, so to make sure they hand in the best possible work when they close the exam booklet/hand in their coursework.