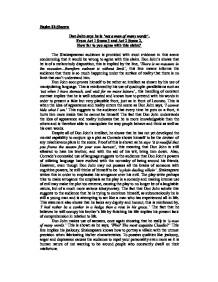 Don John says he is 'not a man of many words'. From Act 1 Scene 3 and Act 2 Scene 2,How far to you agree with this claim?

Basim El-Shoura Don John says he is 'not a man of many words'. From Act 1 Scene 3 and Act 2 Scene 2, How far to you agree with this claim? The Shakespearean audience is provided with stout evidence in this scene condemning that it would be wrong to agree with this claim. Don John's shows that he is of a melancholy disposition, this is implied by the line, 'There is no measure in the occasion...therefore sadness is without limit', this line means informs the audience that there is so much happening under the surface of reality that there is no limit that can't understand him. Don John soon proves himself to be rather an intellect as shown by his use of manipulating language. This is reinforced by his use of quadruple-parallelisms such as 'eat when I have stomach, and wait for no mans leisure', this handling of constant contrast implies that he is well educated and knows how to pretend with his words in order to present a fake but very plausible front, just as in front of Leonato. ...read more.

Also, Conrade's concealed use of language suggests to the audience that Don John's powers of utilizing language have evolved with the normalcy of being around his friends. However, even though Don John may not possess all the brains of someone with cognitive powers, he still thinks of himself to be 'a plain dealing villain'. Shakespeare writes this in order to emphasise his arrogance over his evil. The play-write perhaps tries to make arrogance the emphasis as the play is a comedy and making intense use of evil may make the plot too extreme, causing the play to no longer be of a laughable nature, but of a much more serious idiosyncrasy. The fact that Don John admits this suggests to the audience that he is trying to convince himself, as subconsciously he is still a young man and is attempting to act like a man who has experienced all in life. This statement also shows that he lacks any dignity and honour; this is reinforced by, 'I had rather be a canker in a hedge than a rose in his grace.' ...read more.

Shakespeare uses Don Pedro as his object of Don John's hate in order to show the audience the insensitivity of his character as well as to emphasise the harshness. The harshness is shown as he says 'whatsoever comes athwart his affection ranges evenly with mine.' Once again Don John is not the man with the plan in this scene but his trusty friend Borachio, this once again emphasising the fact that he is not as logical as he would wish. However, despite Borachio's helpfulness, the audience is forced to question his actions as a 'friend' when Don John says, 'Be cunning in the working this, and thy fee is a thousand ducats', this implying that Don John has no true friends but only blood sucking companions that are after his money. This idea reflects the idea of Claudio being after Hero's wealth. Once more, Don John makes use of parallelisms, 'What life is in that, to be the death of this marriage?' Shakespeare often penetrates the text with parallelisms to make emphasis as well as to show the articulated speech of the character. ...read more.