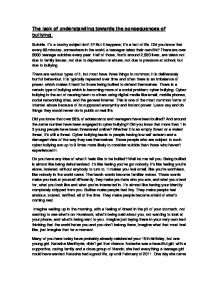 Don't get me started on... Bullying

The lack of understanding towards the concequences of bullying.

Suicide. It’s a touchy subject isn’t it? But it happens; it’s a fact of life. Did you know that every 90 minutes, somewhere in the world, a teenager takes their own life? There are over 5000 teenage suicides every year. Half of those, that’s around 2,500 lives, are taken not due to family issues, not due to depression or abuse, not due to pressure at school, but due to bullying.

There are various types of it, but most have three things in common; it is deliberately hurtful behaviour, it is typically repeated over time and often there is an imbalance of power, which makes it hard for those being bullied to defend themselves. There is a certain type of bullying which is becoming more of a social problem; cyber bullying. Cyber bullying is the act of causing harm to others using digital media like email, mobile phones, social networking sites, and the general internet. This is one of the most common forms of Internet abuse because of its supposed anonymity and instant power. Users say and do things they would never do in public or real life.

Did you know that over 58% of adolescents and teenagers have been bullied? And around the same number have been engaged in cyber bullying? Did you know that more than 1 in 3 young people have been threatened online? Whether it is an empty threat or a violent threat, it’s still a threat. Cyber bullying leads to people having low self esteem and a damaged view of the way they see themselves. Those people who are subject to such cyber bullying are up to 9 times more likely to consider suicide than those who haven’t experienced it.

Do you have any idea of what it feels like to be bullied? Well let me tell you. Being bullied is almost like being dehumanised. It’s like feeling you’ve got nobody, it’s like feeling you’re alone, isolated, without anybody to turn to. It makes you feel small, like you’re worthless, like nobody in the world cares. The harsh words become familiar voices. Those words make you look at yourself differently, they make you hate who you are, and what you stand for, what you look like and what you’re interested in. It’s almost like having your identity completely stripped from you. Bullies make people feel tiny. They make people feel anxious, scared, terrified, all of the time. They make people become afraid of what’s coming next.

Imagine waking up in the morning, with a feeling of dread in the pit of your stomach, not wanting to see what’s on Facebook, what’s being said about you, not wanting to look at your phone, and what’s being sent to you. Imagine just laying there in your very own bed thinking that the world hates you and you don’t belong there, imagine what that must feel like, just imagine that for a moment.

Many of you here today have probably already celebrated your 16th birthday, but one young girl, Natasha MacBryde, didn’t get that chance. Natasha was a beautiful girl, with a supportive, caring family and a close group of friends; she had everything a teenage girl could have wanted. Natasha had a good life, up until February of 2011. One day she came home upset, crying to her parents about how she felt alone at school, but within a few days she was back on her feet and back to her usual self, right up until the night of February 13th. That night she got in from school and asked her mum to collect some sweets for her whilst she was out, ordinary enough, however, she later logged into a website known as Formspring, which I’m sure you may have heard of. If not, it’s a website where people can send you comments, anonymous or not, and Natasha happened to be on the receiving end of some truly nasty messages. One message spoke about how if she didn’t start to treat people the way she should; she would be left with nobody. She didn’t know who to trust or who to turn to. This was one of the last things that Natasha will have read in her life. She left the house that evening, headed for the train station, nobody knew what she was doing and she didn’t tell anybody of what she was planning. The next morning Natasha’s parents got a knock on the door, the police. Their daughter’s body had been found by the railway.

At the end of the day, we’re all the same, we’re all human and we all deserve the same things in life. We all deserve happiness. Let’s make that happen. Let’s stop teenage suicides that are due to bullying. Let’s treat others how we wish to be treated, and let’s make a difference, and let’s do that today.

“Be the change you want to see in the world” – Ghandi.

An excellent piece of persuasive writing which uses rhetorical devices such as questions, imperatives, listing, tripling and real case scenarios to create a powerful essay.
Well planned and uses varied syntax, repetition and use of direct pronouns to convey the message.
Also includes personal opinion.