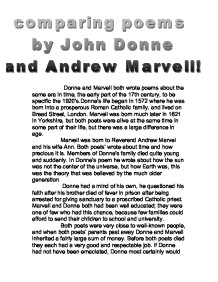 Donne and Marvell's poems where what linked them together, it was the style that they wrote in, they both fit into a metaphysical group. Both poets include an argument with themselves.

Donne and Marvell both wrote poems about the same era in time, the early part of the 17th century, to be specific the 1920's.Donne's life began in 1572 where he was born into a prosperous Roman Catholic family, and lived on Bread Street, London. Marvell was born much later in 1621 in Yorkshire, but both poets were alive at the same time in some part of their life, but there was a large difference in age. Marvell was born to Reverend Andrew Marvel and his wife Ann. Both poets' wrote about time and how precious it is. Members of Donne's family died quite young and suddenly. In Donne's poem he wrote about how the sun was not the center of the universe, but how Earth was, this was the theory that was believed by the much older generation Donne had a mind of his own, he questioned his faith after his brother died of fever in prison after being arrested for giving sanctuary to a proscribed Catholic priest. ...read more.

Marvell carries on to outline what he would do out of love if their love was live on forever, mentioning periods of time like centuries and ages. Marvell uses esoteric imagery to show his argument. He does this by describing his life as vegetable love, this shows that his love is developing love to grow for his mistress, but it also implies that he sees himself as a vegetable soul, which is the lowest level of the soul. Therefore, this suggests a love that could only exist by its association with the vegetable soul that is a lower form then love then sexual love. Donne's poem is about an argument with a natural element-the sun. He not only orders the sun to go away, but also gives a list of reasons why. He also sees time as a large aspect of his poem with the line "Nor hours, days, months, which are the rags of time." ...read more.

In the first block Marvell speaks about his ideal world. He also speaks about his love for a woman and how he wishes time stops so he is with her always. He mentions this by saying "to walk and pass, our long loves day" on line four. Marvell shows how much his love to this woman means, he talks about rubies, the jewel of love "Thou by the Indian Ganges side shouldst rubies find." Both writers talk about time, how it goes too fast. And before you know it everything has been and gone. Marvell uses a hurried tone to make it seem as if time is rushed. Marvell also used the realities of life to subvert the premise of the final part of the argument. In the second block of the poem Marvell addresses the concept of the reality. He shows this by "but at my back I always hear, times winged chariots hurrying near." Here Marvell is facing the reality. Marvell shows that time is an issue and he discusses the lack of time that he and his 'coy mistress' share. By Michelle Whitty ...read more.