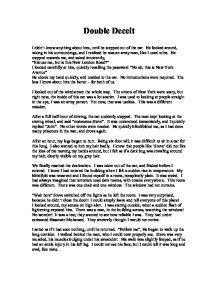 Double Deceit I didn't know anything about him, until he stepped out of the car. He looked around, taking in his surroundings, and I realised he was an army man, like I used to be. He stepped towards me, and asked innocently, "Excuse me, but is this New London Road?" I looked carefully at him, quickly recalling the password "No sir, this is New York Avenue" He shook my hand quickly, and nodded to the car. No introductions were required. The less I knew about him the better - for both of us. I looked out of the windscreen the whole way. The streets of New York were scary, but right now, the inside of this car was a lot scarier. I was used to looking at people straight in the eye, I was an army person. Yet now, that was useless. This was a different mission. After a full half-hour of driving, the car suddenly stopped. The man kept looking at the staring wheel, and said "codename Steve". It was understood immediately, and I quickly replied "John". No other words were needed. ...read more.

He motioned to the chairs and we both sat down. He looked at me long and hard. "Do you know why he pointed his gun at you so fast?" I sensed a lack of organization. Or perhaps I was jumping to conclusions. It seemed he, whom I knew as 'Roland la Porte' did not know of the codename 'Steve'. Ironically, I was proven wrong; "Steve I'm talking about, do you know why he pulled the gun at you?" Obviously, I did: "no!" "Its simple, we wanted to ensure you were not armed!" He looked at me, and laughed at my relieved expression. "Down to business, we trust you now. Anything you do to betray our trust will lead to death. Our mission is simple. There are many things you have yet to learn John. I will bring one to light. There is an elite group by the name of freemasons. We have been battling them for many centuries, and we have failed. They are large, they control the media, and their palace is in America. Despite all this, most of the elite leaders are in Zimbabwe which - Mugabe or not - is one of the safest places right now." ...read more.

"President Castilla wants to give you a medal of honour" I was too busy staring at the computer. "Tell him not to bother; I'm looking at my reward" In The White House "Klein, I have no idea how you managed to save us from this one. Were they really going to nuke Zimbabwe?!" President Castilla was utterly shocked. My self, and my boss, Klein (Director of the CIA) had returned from New York to Washington in order to brief the president. La Porte and Steve had been trapped, and fooled into thinking that I was the one to help them. It was all part of the plan. I was the one who would save the freemasons and Zimbabwe. "Yes they were, but we stopped them" Klein looked proudly at me "Well, that's brilliant. Freemasonry is an essential part of America - no, IT IS AMERICA" "Yes" I said "I realise that. Without the freemasons, we would not have the unity we have in our society, the people would go against us, the media would not be able to hide us...it would really be disastrous. Am I wrong in saying you yourself are a freemason?" "No that's absolutely correct" the president replied, about seventeen seconds before Zimbabwe blew up, and the freemasons came to a tragic end. THE (ABSOLUTE) END! ...read more.