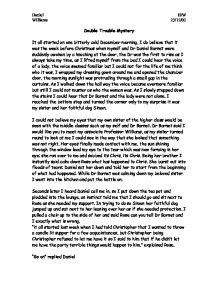 Double Trouble Mystery It all started on one bitterly cold December morning, I do believe that it was the week before Christmas when myself and Dr Daniel Barnet were suddenly awoken by a knocking at the door, the Dr was the first to rise as I always take my time, as I lifted myself from the bed I could hear the voice of a lady, the voice seemed familiar but I could not for the life of me think who it was, I wrapped my dressing gown around me and opened the chamber door, the morning sunlight was protruding through a small gap in the curtains. As I walked down the hall way the voice became evermore familiar but still I could not muster as who the woman was. As I slowly stepped down the stairs I could hear that Dr Barnet and the lady were not alone. I reached the bottom step and turned the corner only to my surprise it was my sister and her faithful dog Simon. I could not believe my eyes that my own sister of the higher class would be seen with the middle classes such as my self and Dr Barnet. ...read more.

This was breaking his usual routine. As he would normally lounge around in his dressing gown before having breakfast, once he'd had breakfast with the family he would let Thomas use the bathroom first then he would use it. They would both get dressed and Christopher would take Thomas to school on his way to work. Thomas was so disappointed that his dad had ignored him and not taken him to school." My blood began to boil could not hold in the hatred for this man any longer, he had been treating my sister and my nephew so badly I could just kill him. "Since then I have not heard or seen of him I thought he was staying at the office and doing over time to raise funds for Christmas to buy little Thomas his Christmas presents, that is why I have come to find you," Do you have any more information about where he could be or anything that could get us started. Asked Dr Barnet. "Well there was a report that noises were heard near my husbands late mothers house, but I dare not go there as I do not have the company of a man who I stronger that I." replied rose in a tearful kind of way. ...read more.

He is muttering "sorry mum I didn't mean to do it. Please for give me." Rose slapped him round the face and asked him what he didn't mean to do to his brother Rob, He replied in a tearful way I killed Rob I killed Rob, "Who is Rob?" asked Dr Barnet My identical brother my mothers favourite son and he got the rolls and all of mothers money and I got nothing so I wanted it all for myself so I ties him up in chains and attached it to the mains electricity and I whipped him with grandfathers sabre which he used in a fencing competition. I called the authorities and they dealt with the matter so all the clues we found could not have helped us in any way as they were identical twins and we could not tell the difference and that was only down to the split personality of one greedy man who was not happy unless he had everything. Since then I have looked after my sister and I now live with them taking care of them until Christopher is finally classed as a sane person and he can once again look after his family. That was the tale of the double trouble mystery. Another mystery solved for the ever expanding case book of world famous Professor Williams and Dr Barnet. Daniel H/W Williams 23/12/02 ...read more.