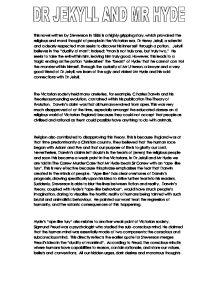 This novel written by Stevenson in 1886 is a highly gripping story, which provoked the religious and moral thought of people in the Victorian era. Dr Henry Jekyll, a scientist and a dearly respected man seeks to discover his inner self through a potion. Jekyll believes in the "duality of man": indeed; "man is not truly one, but truly two." He seeks to take the evil within him, leaving him truly good. However, this leads to a tragic ending as the potion "unleashes" the "beast" of Hyde; that he cannot control the monster within himself. Through the curiosity of Mr Utterson, a lawyer and a very good friend of Dr Jekyll, we learn of the ugly and violent Mr Hyde and his odd connections with Dr Jekyll. The Victorian society held many anxieties. For example, Charles Darwin and his theories surrounding evolution, contained within his publication The Theory of Evolution. Darwin's claim was that all humans evolved from apes. This was very much disapproved of at the time, especially amongst the educated classes and religious world of Victorian England; because they could not accept that people as civilised and rational as them could possibly have anything to do with animals. Religion also contributed to disapproving this theory. This is because England was at that time predominantly a Christian country. ...read more.

Jekyll could not "suppress" the "urges" of Hyde; language synonymous with Freud's psychoanalysis. He pictures Hyde as "growling" with "intent". When Jekyll attempts to "cage the beast", Hyde eventually comes "roaring out", gaining strength and growing in "stature" until, eventually, Jekyll metamorphises into Hyde completely. By the end of the text, Hyde has overpowered Jekyll, becoming the "dominant self". In short, bad overpowers good. Again, this reflects contemporary fears and anxieties. Hyde is the embodiment of Freud's subconscious, the "twin element", the "polar self" within all of us. The thought of humans degenerating into Hyde's behaviour is, once again, a frightening thought for nineteenth century readers. Robert Louis Stevenson sets his story in the heart of London; in the domestic interiors of such respectable, professional people as lawyers, doctors and men of science. Yet in Dr Jekyll and Mr Hyde, he shows us a city with so much divisions and homes disrupted by mysterious occurrences. London held so much anxieties involving( not only Darwin and Freud, but also) city living and fears surrounding crime, prostitution and the widespread of venereal disease often brought into middle-class homes by seemingly respectable men. This was regarded as a threat to national identity. Religion was crucial for Victorians. Before all era's phobia began, society was held together firmly by religion. ...read more.

Stevenson crafts a dreary and dark image of the city in London. He creates a feeling of the city being incapable of absolutely anything constructive. Certainly another fear cast upon the audience is the continuous reference to Hyde as Jekyll's other self. Physically Hyde is smaller, shorter more "dwarfish" and "displeasing" to look at. He is seen as "deformed" but with no "marked deformity". In contrary Jekyll is a "smooth-faced "man, but has so many "dark desires" that he cannot control the urges within himself into becoming Hyde- the "monster". In conclusion Stevenson has made Hyde the"dominant" self ' the dark empowers over good. Jekyll- as the good individual- is overwhelmed by the power and destruction of Hyde. His experiment has proved him wrong- he cannot control what has become of him. Hyde becomes the lasting image of our "dual opposition within" so we have an iconic monster - Mr Hyde. This novel evokes to the audience the senses within our selves. As humans we detest anything unusual, mysterious and provocative. Stevenson has patently portrayed this. Although, we as a twenty-first century audience do not live and have similar concerns and anxieties, this novel has captured our inner fears and marked us with permanent goose bumps. Personally, I feel that this novel was extremely powerful in conveying its messages and creating fear and dread in society. ...read more.