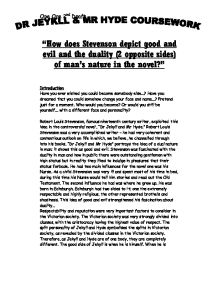 "How does Stevenson depict good and evil and the duality (2 opposite sides) of man's nature in the novel?" Introduction Have you ever wished you could become somebody else...? Have you dreamed that you could somehow change your face and name...? Pretend just for a moment. Who would you become? Or would you still be yourself... with a different face and personality? Robert Louis Stevenson, famous nineteenth century writer, exploited this idea in the controversial novel, "Dr Jekyll and Mr Hyde." Robert Louis Stevenson was a very accomplished writer - he had very coherent and contentious outlook on life in which, we believe, he channelled through into his books. "Dr Jekyll and Mr Hyde" portrays the idea of a dual nature in man; it shows this as good and evil. Stevenson was fascinated with the duality in man and how in public there were outstanding gentlemen with high status but in reality they liked to indulge in pleasures that their status forbade. He had two main influences for the novel one was his Nurse. As a child Stevenson was very ill and spent most of his time in bed, during this time his Nurse would tell him stories and read out the Old Testament. The second influence he had was where he grew up. He was born in Edinburgh. ...read more.

I bind my honor to you that I am done with him"), was indeed a hypocritical or empty vow. Even though Jekyll did try for two months to lead a "life of such severity," the Hyde in Jekyll was constantly struggling for release. Repressed for so long, when Hyde emerged, he "came out roaring." Jekyll now has to contend with his "lust of evil," with the "damned horrors of the evenings," and with"the ugly face of iniquity" which stared into his soul. Hyde is not to be denied because, secretly, Jekyll still desires his presence and his activities. But he also knows that if he lets "Hyde peep out an instant . . . the hands of all men would be raised to take and slay him." Therefore, Hyde is trapped by his own evil ways and is confined to the laboratory. However, when Jekyll is sitting peacefully one day in Regent's Park, in broad daylight, he feels all of the symptoms of Hyde emerging without the aid of the chemical potion. Hyde appears because Jekyll, who has so long tried to deny and suppress him, subconsciously desires that he appear again. But the appearance must be concealed, and so Jekyll/Hyde--by now, it is difficult to separate the two--conceive of a plan to get their revenge on Dr. ...read more.

too does Victorian society prefer to repress and deny the existence of an uncivilized or savage element of humanity, no matter how intrinsic that element may be. Yet, even as Utterson adheres rigidly to order and rationality, he does not fail to notice the uncanny quality of the events he investigates. Indeed, because we see the novel through Utterson's eyes, Stevenson cannot allow Utterson to be too unimaginative-otherwise the novel's eerie mood would suffer. Correspondingly, Stevenson attributes nightmares to Utterson and grants him ominous premonitions as he moves through the city at night-neither of which seem to suit the lawyer's normally reasonable personality, which is rarely given to flights of fancy. Perhaps, the novel suggests, the chilling presence of Hyde in London is strong enough to penetrate even the rigidly rational shell that surrounds Utterson, planting a seed of supernatural dread. Good and evil mostly come in pairs - without good there is no evil, without evil there is no good. It is the temperament of mankind this relates to Dr Jekyll and Mr Hyde. There is probably always a little bit of evil in all of us and it is in our own state of mind (choice) to choose if to that or do that. This is what Dr Jekyll experienced. ?? ?? ?? ?? Ope Ore 2nd Draft ...read more.