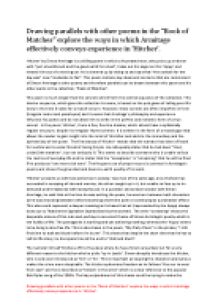 ﻿Drawing parallels with other poems in the ?Book of Matches? explore the ways in which Armitage effectively conveys experience in ?Hitcher?. ?Hitcher? by Simon Armitage is a chilling poem in which a frustrated man, who picks up a hitcher with ?just a toothbrush and the good earth for a bed?, takes out his anger on this ?hippy? and throws him out of a moving car: he is cheered up by doing so and says that ?the outlook for the day was? now ?moderate to fair?. This poem contains key ideas and concerns that are reminiscent of Simon Armitage?s other poetry and therefore parallels can be drawn between this poem and his other works in the collection, ?Book of Matches?. This poem is much longer than the sonnets which form the central sequence of the collection. This shorter sequence, which gives the collection its name, is based on the pub game of telling your life story in the time it takes for a match to burn. However, these sonnets are often imperfect in form (irregular meter and pararhyme) ...read more.

always loses out to Thatcherite Capitalism (symbolised by the worker). The verb ?screaming? shows the desperate nature of this man and portrays a recurrent theme of Simon Armitage?s poetry which is the futility of life. The protagonist is working and yet achieving nothing, whereas the ?hippy? seems to be living a care-free life. This is also shown in the poem, ?My Party Piece? in the phrase, ?I still find time to stall and blush before I?m burnt?. This shows that despite the short time that he has to tell his life story, he has spare time at the end to ?stall and blush?. The narrator himself hitches a lift to the place where he has a hired car parked, but for a very different reason to the hitcher who he picks ?up in Leeds?. Simon abruptly introduces the hitcher, who is only ever introduced as ?him? or ?he?. This is important as keeping the character anonymous makes the crime more despicable. The hitcher epitomises freedom as he follows ?the sun to west from east? and he is described as ?blowin? in the wind? which is a clear reference to the popular Bob Dylan song of the 1960s. ...read more.

The statement ?We were the same age, give or take a week? tells us that the narrator obviously made a direct comparison between himself and the hitcher. The hitcher ?said he liked the breeze/to run its fingers/through his hair?: the personification brings to life this description that must have aroused such envy in the narrator at the hitcher's freedom that he began his frenzied attack. In the last stanza we again see the cold-heartedness of the narrator in the matter-of-fact tone in which he speaks, ?it was twelve noon?. Realism is added to the poem in the abrupt way the narrator says, ?stitch that?, a violent, northern phrase uttered when head-butting someone. The chilling humour and flippant style shown in the line, ?you can walk from there? is shocking and shows that the narrator shows no remorse. In conclusion, the combination of the colloquial tone in which the protagonist speaks and the violent actions that he depicts effectively portrays experience and, in particular, a man who lacks experience and yet is tired of life. Drawing parallels with other poems in the ?Book of Matches? explore the ways in which Armitage effectively conveys experience in ?Hitcher?. ...read more.