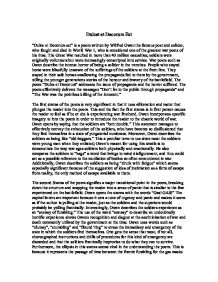 Dulcet et Decorum Est "Dulce et Decorum est" is a poem written by Wilfred Owen the famous poet and solider, who fought and died in World War 1, who is considered one of the greatest war poets of his time. The Great War resulted in more than 40 million casualties; soldiers were originally volunteers but were increasingly conscripted into service. War poets such as Owen describe the intense horror of being a solider in the trenches. People who stayed home were blissfully unaware of the sufferings of the soldiers at the front line. They stayed in their safe homes swallowing the propaganda fed to them by the government, telling the younger generations stories of the honour and bravery of the battlefield. The poem "Dulce et Decorum" addresses the issue of propaganda and the horror suffered. The poem effectively delivers the messages "Don't lie to the public through propaganda" and "The War was the pointless killing of the innocent." The first stanza of the poem is very significant in that it uses alliteration and meter that plunges the reader into the poem. ...read more.

Interestingly, Owen describes the soldiers experience as an "ecstasy of fumbling." The use of the word "ecstasy" to describe an undoubtedly horrific experience shows Owens recognition and disgust at the aesthticization of war and death commonly utilized by the government at the time. Owen uses words such as "clumsy", "stumbling" and "flound'ring" to stress the immediacy and emergency of the state in which the soldiers find themselves. One gets the sense that most, if not all, choreographed instructions and drills of procedures for this kind of emergency are discarded and that the soldiers frantically improvise to do what they can to survive. Furthermore, the ellipsis in this stanza seems vital in the understanding the poem. This is because it represents the passage of time between the frantic fumbling for the gas masks and Owen's viewing of a man "drowning" in a "sea" of gas, struggling to survive, the use of "sea" and "drowning" conveys the image of the body thrashing as one would when drowning. ...read more.

The last stanza, especially the ending, read as if it is a final plea to the reader. Owen says that if the reader were able to truly experience the horrors of fighting in battle, he or she would never promote or glorify war to the future generations. This plea represents a reworking of the title of the poem, which literally translates from Latin into "How sweet it is to die for your country." If when reading the poem the reader interprets the title literally, by the end of the poem it is clear that Owen uses the title as a tool for making an ironic statement instead. Throughout the poem the reader is shown vivid imagery describing war which can effectively fill one with anger, pity, sadness or even satisfaction that at least someone is speaking the truth. For me personally it makes me sad. "Dulce et Decorum est" is tragic. Owen speaking from first hand experience of a soldier sent to the front line, hurls pain in to the reader's face, causing the reader to feel both pity and guilt for the crimes of war. Elizabeth Dougall 1,071 words ...read more.