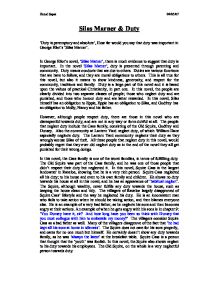 'Duty is peremptory and absolute', How far would you say that duty was important in George Eliot's 'Silas Marner'.

Silas Marner & Duty 'Duty is peremptory and absolute', How far would you say that duty was important in George Eliot's 'Silas Marner'. In George Eliot's novel, 'Silas Marner', there is much evidence to suggest that duty is important. In the novel 'Silas Marner', duty is presented through parenting and community. Duty means conducts that are due to others. Duties are various functions that we have to follow, and they are moral obligations to others. This is all true for this novel, but also it means to show kindness, generosity, and respect for the community, traditions and family. Duty is a large part of this novel and it is based upon the values of practical Christianity, in part one. In this novel, the people are clearly divided into two separate classes of people; those who neglect duty and are punished, and those who honour duty and are latter rewarded. In this novel, Silas himself has an obligation to Eppie, Eppie has an obligation to Silas, and Godfrey has an obligation to Molly, Nancy and his father. However, although people respect duty, there are those in this novel who are disrespectful towards duty, and are not in any way or form dutiful at all. The people that neglect duty include the Cass family, consisting of the Old Squire, Godfrey and Dunsey. Also the community at Lantern Yard neglect duty, of which William Dane especially neglects duty. The Lantern Yard community neglects their duty as they wrongly accuse Silas of theft. All these people that neglect duty in this novel, would probably regret that they ever did neglect duty as in the end of the novel they all get punished for their wrong doings. In this novel, the Cass family is one of the worst families, in terms of fulfilling duty. The Old Squire was part of the Cass family, and he was one of those people that didn't respect their duty but neglected it. ...read more.

Nancy is quite dutiful throughout the whole of the book. Everyone in this novel admires Nancy, she is described as 'thoroughly bewitching' and she is beautiful. Nancy is a morally good person and she is well respected. She is someone who is an excellent, outstanding and hardworking housewife, she is a model wife, and never neglects any kind of duty at all. In this novel, she always seems to be careful about showing and respecting duty. In this book, particularly in the beginning of the book she shows a lot of duty towards her family. She especially shows a lot of duty towards her sister, Pricilla. She loves her family and although she is minimally educated, she has 'the essential attributes of a lady.' Nancy shows duty towards her sister by making her wear the same clothes as her, as she wants the two of them to look the same, so that other people don't look at them differently. Nancy makes her sister wear the same clothes as hers when they go to a party in chapter eleven, and she refuses to call her sister ugly, despite it being obvious when she says, " No, Priscy, don't say so. I begged and prayed for you not to let us have this silk if you'd like another better. I was willing to have your choice, you know I was.' Nancy's dutiful character is shown throughout the entire book. Towards the end of the book, Godfrey's mind was in a state of depression because he doesn't have any children. Nancy supports him, to prevent things getting worse for him, and in the end she agrees to adopt Godfrey's daughter Eppie. She gives the go-ahead for the adoption when she says, "But it's your duty to acknowledge her and provide for her, and I'll do my part by her, and pray to God Almighty to make her love me." ...read more.

And I don't want to be a lady - thank you all the same." This shows her loyalty to Silas; even after she gets married she refuses to leave Silas, as she loves him so dearly. In the end, those that neglect duty are punished and do not get the happiness that they want and need. All those that neglect duty include the Cass family (Squire, Godfrey, and Dunstan), and the community at Lantern Yard, especially William Dane are punished. Godfrey is punished as Eppie refuses to be adopted by him and he never has a child. This is punishment for not taking her in when he had the chance. Dunstan, who also neglected duty, just disappears, and dies after falling in a pond. The Squire is punished as his sons turn out to be bad or weak and his sons don't end up being like wants them to be. William Dane and the rest of the Lantern Yard community all disappear without a trace. Those that honour and respect duty, are all rewarded and they get the happiness that they want and need. This is because they did not neglect their duties throughout the book, but honoured them. All those that honour duty in this novel include Silas, Eppie, the Lammeter family (Pricilla), and the Winthrop family (Dolly and Aaron). In the end Pricilla gets to manage and run the farm, and that is the reward for caring for her father. Silas is rewarded by getting his gold back and by Eppie being loyal to him and not leaving him, and also he regains his trust in God. Eppie, who stays with Silas, is rewarded by her marriage to Aaron Winthrop. Finally Dolly is rewarded when her son marries Eppie, and she gets true gratification for making Silas who is. 'Duty' is a major theme of Silas Marner. It is one of the 'practical aspects' of Christianity, favoured by Eliot. The novel could be said to be a 'fable'. But realistically in that, Nancy follows duty but is still punished. Kunal Sapat 09/05/07 ...read more.