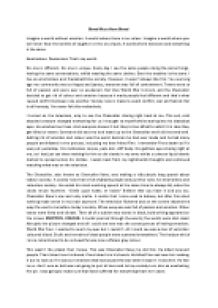 Dystopian writing. Imagine a world without emotion. A world where there is no colour.

﻿Blood Must Have Blood Imagine a world without emotion. A world where there is no colour. Imagine a world where you will never hear the twinkle of laughter or the cry of pain. A world where everyone and everything is the same. Emotionless. Passionless. That?s my world. No one is different. No one is unique. Every day I see the same people doing the same things, having the same conversations, whilst wearing the same clothes. Even the weather is the same. I live an emotionless and rhadamanthine society. However, it wasn?t always like this. You see long ago my community was so happy and joyous; everyone was full of contentment. ...read more.

Getting rid of emotion and colour was the worst decision he had ever made and he had many people annihilated in the process, including my best friend Finn. I remember Finns death as if it was just yesterday. His motionless corpse, pale skin, stiff body. His guiltless eyes staring right at me, as I had just sat there waiting for him to die slowly in my arms whilst a crimson liquid slowly started to spread across his clothes. I swam back from my nightmarish thoughts and continued watching what was on the television. The Chancellor, also known as Chancellor Kane, was making a ridiculously long speech about today?s society. A society now that is full of ghastly people and punitive rules. ...read more.

World War Four. I wanted to avert my eyes but I couldn?t. All I could see was a river of vermilion coloured blood. Skulls and remains of dead people were scattered everywhere. The horizon which I once remembered to be so beautiful was now a lifeless grey colour. This wasn?t the planet that I knew. This was Chancellor Kane; he did this. He killed innocent people. Their blood is on his hands. Finns blood is in his hands. He killed Finn and now he?s making it out to look as if it was our emotions that had caused the war when it wasn?t. It was him. He lied to us. And I sure as h**l was not going to just sit here and let my society turn into an everlasting fire pit. I was going to make sure that Kane suffered for everything that?s he?s done. ...read more.