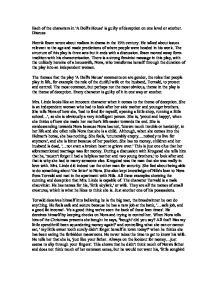 Each of the characters in 'A Doll's House' is guilty of deception on one level or another. Discuss

Each of the characters in 'A Doll's House' is guilty of deception on one level or another. Discuss Henrik Ibsen wrote about realism in drama in the 19th century. He talked about issues relevant to the age and made predictions of where people were headed in his work. The structure of this play is three acts but it ends with a discussion. Ibsen moved away form tradition with his characterisation. There is a strong feminist message in this play, with the unlikely heroine of a housewife, Nora, who transforms herself through the duration of the play into an independent women. The themes that the play 'A Doll's House' comments on are gender, the roles that people play in life, for example the role of the dutiful wife or the husband, Torvald, to protect and control. The most common, but perhaps not the most obvious, theme in the play is the theme of deception. Every character is guilty of it in one way or another. Mrs. Linde looks like an innocent character when it comes to the theme of deception. She is an independent woman who had to look after her sick mother and younger brothers. She tells Nora of how she, 'had to fend for myself, opening a little shop, running a little school...', so she is obviously a very intelligent person. ...read more.

He tells her that she is, 'just like your father. Always on the lookout for money...just seems to slip through your fingers'. This shows that he didn't think much of Nora's father and does not think much of her common sense, but he would not want his, 'little songbird to be the least bit different', because he likes to feel superior. He fires an old school friend, Nils, because he calls him Torvald at work. He tells Nora he loves her, then he is so quick to let her go at the slightest sign of imperfection. He is so fickle and self obsessed that it is hardly surprising that Nora leaves him at the end of the play. Krogstad is the most obvious case of a character that is deceitful. He is a shady character with a mysterious past. He is looked down on in society and has a bad reputation but he is very cunning. He takes advantage of Nora's naivete and lack of knowledge considering the law, he says, 'did this never strike you as fraudulent..?' when he is interrogating Nora about her I.O.U . He is threatening towards Nora when he says things like. 'It depends entirely on what sort of Christmas you want to have' when he is trying to make Nora help him save his job. ...read more.

When Mrs. Linde is condescending towards Nora, Nora tells her out right that, 'little Nora isn't as stupid as everybody thinks'. That comment along with, 'you all think I'm useless', proves to the reader that Nora knows everyone around her thinks she is na�ve. She deceives them into believing that for her own protection. Nora lies about why she wants to help Krogstad keep his job to Torvald. She lied to Krogstad when she said the signature on the I.O.U was her father's. She also lied to her husband about the odd jobs that she had to do to pay back her IOU. Nora lets people think that she is happy with her life, but she mentions to Mrs. Linde that the fact that Mrs. Linde's mother is dead and brothers' grown up, 'must be such a relief', because Mrs. Linde has no one to look after and can be independent. Nora slowly takes off her mask of deception and breaks away from the 'Doll' image that she projected. At the end of the novel she leaves her home, children and husband to concentrate on herself. A complete turn around from the, 'little skylark', that we were introduced to. All the characters in this book are guilty of some form of deceit. Some are more innocent than others in their intentions, but they are all selfish characters in their own way. ...read more.